There is a new battle for which Muslim country would be considered responsible for Islamic life in Jerusalem.


Saudi Arabia is currently investing a great deal of behind-the-scenes effort into taking away from Jordan its guardianship of the holy sites of Jerusalem, a senior official in the Palestinian Authority (PA) told Al-Monitor on condition of anonymity. The pressure seems linked to the Saudis’ friendly relations with the United States, and with President Donald Trump’s desire to win Arab support for his Middle East peace plan, which Jordan has not backed.

This revelation aligns with a June 22 report from Israeli newspaper Haaretz that the Jordanian monarchy is worried about Saudi Arabia’s intent to deprive Jordan of its guardianship. Several peace agreements signed with Israel, such as the Jordan-Israel peace treaty of 1994, guaranteed Jordan’s guardianship. [No, they didn’t – EoZ].

“Saudi Arabia is now setting the stage for its guardianship of these sites,” the senior PA official said, “and it is working on strengthening its relations with the Palestinian community in Jerusalem. It’s also trying to lead religious figures and public opinion leaders from Jerusalem to visit Saudi Arabia and meet with Crown Prince Mohammed bin Salman to discuss the idea and try to garner Jerusalemite support for it.”

In January, the Arabi21 website quoted a Jordanian source as saying Jordanian authorities were discussing behind closed doors the Saudi steps regarding Jerusalem and were worried about their guardianship.

Raed Daana, one of the most important religious authorities in Jerusalem and former director of preaching and guidance at Al-Aqsa Mosque Directorate, told Al-Monitor that Saudi efforts to take over the sites’ administration are “serious and real.” He pointed out that such efforts emerged following Trump’s visit to Saudi Arabia in May 2017.

On Dec. 19, the London-based Al-Quds Al-Arabi newspaper revealed that there were behind-the-scenes differences between the Jordanian and Saudi delegations during the Arab Inter-Parliamentary Union, which took place Dec. 17 in Morocco. Saudi Arabia rejected Jordan’s assertion of its guardianship of Jerusalem’s holy sites, the paper said.
Although decision-makers in Saudi Arabia did not publicly announce their desire to manage the holy sites in Jerusalem, several Saudi media circles have called for such a scenario. Abdul Hamid al-Hakim, a Saudi media figure close to the Saudi ruling family, called during the BBC’s “Talking Point” program May 16 for the holy sites in Jerusalem to be under Saudi administration. 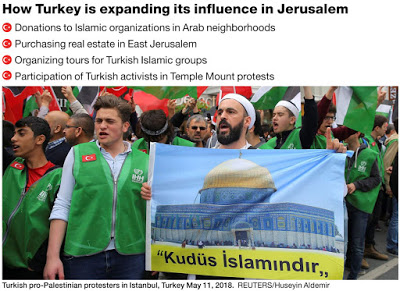 But at the same time, Turkey is making a play for Islamic Jerusalem as well:


Jordan, Saudi Arabia and the Palestinian Authority have all separately warned Israel over the past year about growing Turkish activity in East Jerusalem, which they say is part of an attempt by Turkish President Recep Tayyip Erdogan to “claim ownership over the Jerusalem issue.”

Senior officials in Amman and Ramallah told Israel that Turkey was extending its influence in the Arab neighborhoods of Jerusalem. Israeli defense officials told Haaretz they are aware of the situation and that the issue is now receiving more attention.

Turkey’s attempts to gain influence in East Jerusalem have been monitored by Israel’s security services for more than a year. Israeli sources pointed to a number of ways in which Turkey is increasing its presence in the city.

These include donations to Islamic organizations in Arab neighborhoods; organized tours arranged by Islamist groups in Turkey, some closely affiliated with Erdogan’s Justice and Development Party (AKP), which have brought thousands of Turkish citizens to Jerusalem over the past year; and the prominent presence of Turkish activists in demonstrations around the Temple Mount (known to Muslims as Haram al-Sharif).

JCPA has also written about increased Turkish influence in Arab sections of Jerusalem.

It isn’t religion. It is politics, as each country is jockeying to appear to be the leader of the Islamic world.

Tellingly, none of these countries even consider allowing the Palestinian Authority to control any part of Jerusalem.