Here’s how the world media reported the story this week: 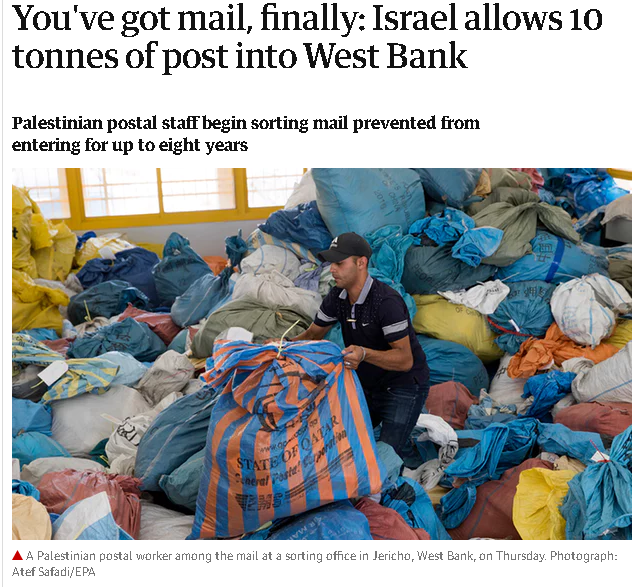 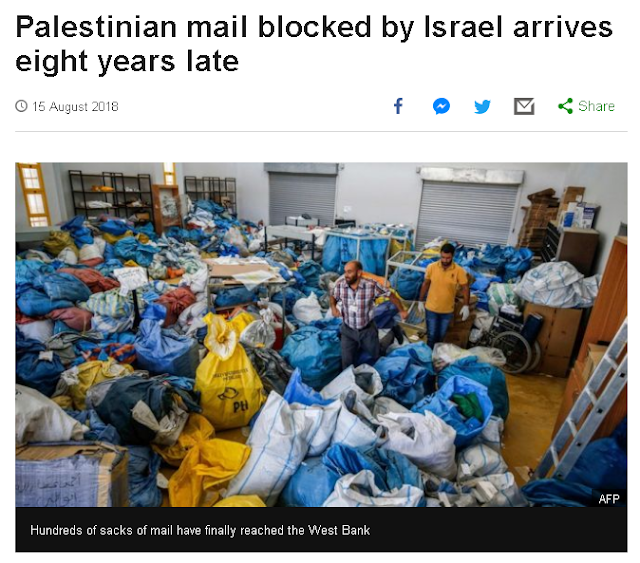 Here’s the truth, from Tomer Ilan (I modified it slightly in point 4 to conform with Haaretz’ reporting):

Originally released by the French news agency AFP, it has been published again and again in BBC News, New York Times, NBC News, The Guardian, The Independent, Daily Mail and many others.

The article make it look like Israel has cruelly blocked *all* Palestinian mail from being delivered for 8 years and highlights that the “blocked” mail includes a wheelchair, showing just how evil these Israelis are, even towards people with disabilities. While blaming Israel, the article says the mail had been held in Jordan, but never explains how it got there in the first place. All these outlets just republish the AFP article.

2. Mail is delivered to the PA from all countries of the world without any problem, except mail from Arab countries that boycott Israel’s Postal Service and sent it to Jordan instead.

3. Jordan was not authorized to transfer mail to the PA, so any mail that was sent to the PA via Jordan was stuck there.

4. Israel, Jordan and the PA have negotiated since 2009 on an agreement to allow Jordan to transfer mail to the PA. In 2016 an MOU was signed and while there hasn’t been a full agreement yet, according to Haaretz, Israel allowed the 10 tons of mail stuck in Jordan to finally be delivered as a goodwill gesture while negotiations continue.

The PA confirms the above. Hussein Sawafta, director of the Palestinian postal service, told Haaretz that “Israel held up the mail because it was not properly addressed to the Israeli postal service”.

So world media makes it looks like all mail was blocked, not just mail from Arab countries.

And instead of blaming Arab countries who caused the whole problem by refusing to use Israel’s Postal service, they blame Israel.

And just to make sure hatred to Israel will be generated, they put a wheelchair into the story.

Comments on Facebook show just how successful this propaganda is.

For example on BBC News Facebook page, 1500 comments were posted, 99% of which are hateful to Israel.