While there are occasions here and there where the Protocols of the Elders of Zion are called out as a hoax in Arab media, most of the time they are accepted as fact.

At Ad Dustour,  in an article entitled “Who Rules the World?,” Rashad Abu Dawood gave an account of the Bilderberg annual meeting and says that it appears to be an annual Elders of Zion meeting.

The Saudi news agency has an article by Mai Khaled where she says, matter of factly:

The first book I read completely from cover to cover besides children’s books was a book that I found in the Abi Library entitled: The Protocols of the Elders of Zion. The color of its cover is red, with a poor picture of a black hand, holding a fist on the globe, tattooed under the six-pointed star, and written in small script: the Jews are behind every crime.

I remember thinking after reading the book: Why do we also not have protocols against the Zionists, why do they plan our occupation for decades and we are not planning anything?

The most absurd article of the month goes to Ammon News’ Odeh Odeh: 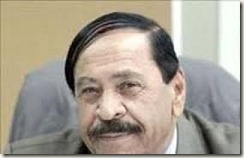 Since the establishment of Israel 72 years ago, and until now, it has not negated what was stated in the Protocols of the Elders of Zion, which affirms the efforts of the world’s Jews to establish a “Jewish state” between the Nile and the Euphrates ..
There are no internationally recognized borders for the Israeli enemy state, they are moving borders since its establishment in 1948 and after The 1967 war…
It makes no difference whether  the land captured is Palestinian or Arab, so here it occupies the Golan Heights, which is Arab Syrian land, and on top of that, the Israeli cabinet holds one of its meetings there…
The Israeli flag says all this: the two blue lines are the Euphrates rivers in Iraq in the east and the Nile River in Egypt in the west.

The Protocols hoax began in 19th century Russia, was enthusiastically accepted by Henry Ford and the Nazis, and now are believed by the Arabs. There are many kinds of antisemitism but they all feed off each other.