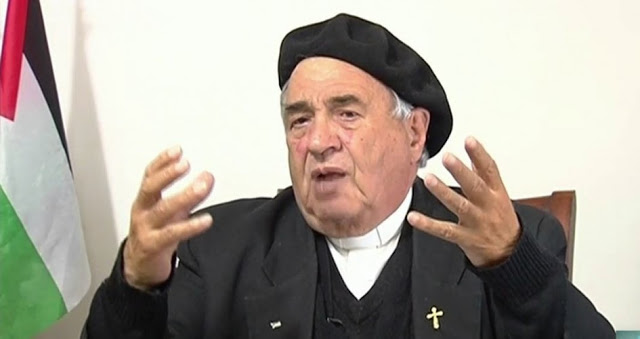 Father Manuel Musallam is a prominent Palestinian Arab priest and former head Department for the Christians of the PLO Foreign Office. He has been a Fatah activist for decades.

In a recent interview in Palestine Today, he says explicitly that the Palestinian ambition is to take over Israel.

“The great March of Return and its continuation reflects the state of the clash between the Palestinian resistance and the Israeli occupation forces, and the alarm bell in Israel continues to touch on the fact that the Palestinian did not forget and will not forget his land, country and villages. Jerusalem is the capital of Gaza, Jerusalem is Gaza, Gaza is the Palestinian right, Gaza is Haifa, Safad, Acre, Umm al-Rashrash (Eilat), Nablus, Galilee, and all of the land of Palestine.”

Tellingly, he spoke at a rally in Jenin in 1993 meant to get Palestinians on board with the Oslo process that had begun only days earlier. The speaker before him at that speech, representing Fatah’s youth group, “gave a short, passionate defense of the Declaration of Principles, arguing that gaining a foothold in Gaza and Jericho would be but an initial step in an eventual reclamation of all of Mandate Palestine and the return of all refugees.” Musallam’s speech was received even more enthusiastically and he ended it with a bastardization of Psalms:  ‘If I forget thee, O Palestinian Jerusalem, may my right hand lose its cunning.’ He now routinely refers to “occupation” as starting in 1948, not 1967.

This is five days before Arafat said the same thing on Jordanian TV:


Do not forget that our Palestine National Council accepted the decision in 1974. It called for the establishment of a national authority on any part of Palestinian land that is liberated or from which the Israelis withdrew. This is the fruit of your struggle, your sacrifices, and your jihad … This is the moment of return, the moment of gaining a foothold on the first liberated Palestinian land … Long live Palestine, liberated and Arab.

Everyone in Yasir Arafat’s Fatah knew from the beginning that Oslo was a Trojan horse meant to take over all of Israel.

And yet the Western media and pundits and politicians still look at Oslo as the solution, rather than the first stage of the intended destruction of Israel.