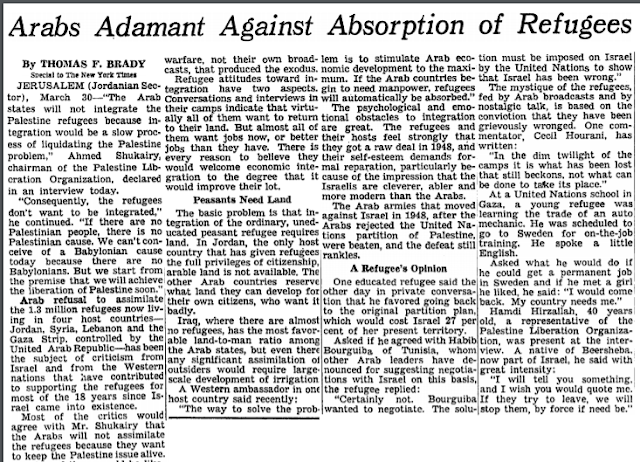 JERUSALEM (Jordanian Sector), March 30 -“The Arab states will not integrate the Palestine refugees because integration would be a slow process of liquidating the Palestine problem.” Ahmed Shukairy. chairman of the Palestine Liberation Organization. declared in an interview today.

The then-PLO leader is explicitly saying that he doesn’t want the Arab nations to integrate the refugees because the “Palestinian cause”is more important then their human rights.

(The claim that the refugees didn’t want to be integrated is a lie. Every time they had the chance to gain citizenship, in Jordan, Egypt, Lebanon or the West, they eagerly took that opportunity.)

The very end of the article makes this even more explicit. The reporter interviews a Palestinian who is about to go to Sweden for training as a mechanic. Even so, he insists that he would return – but there is a PLO official in the room during the interview.


Hamdi Hizrallah. 40 years old. a representative of the Palestine Liberation Organization, was present at the interview. A native of Beersheba. now part of Israel. he said with great intensity:

“I will tell you something. and I wish you would quote me. If they try to leave. we will stop them, by force it need be.”

I’m happy to quote him. It proves that creating and perpetuating the myth of a Palestinian people is more important to their leaders than their very lives.

And it also proves that Palestinian identity was so weak in the 1960s that the PLO was convinced that without a perpetual refugee problem, no one would want to identify as Palestinian.

Without UNRWA, they really would have gone the way of the Babylonians – and they would today be happy Syrians, Lebanese, Jordanians, Kuwaitis and Egyptians.