Elder of Ziyon wrote yesterday that the Palestinians do not feel particularly obligated by the international agreements they sign.

According to Palestinian Prime Minister Shtayyeh:


“The government adheres to Palestinian values and principles, and does not violate the Sharia…Our religious and national values are above everything else, and this is in keeping with the decision of the Constitutional Court’s decision. [emphasis added]

According to an Abbas aide:


There is also a decision by the Constitutional Court whereby international agreements prevail over local laws, provided these are consistent with the Palestinian religious and cultural legacy. [emphasis added]

The issue is not having principles against which treaties must be measured, it is that these principles are revealed 5 years after multiple treaties have been signed.

This cop-out is reminiscent of Jordan, which has claimed that its extradition treaty with the US — by which it handed over Eyad Ismoil, one of those responsible for the 1993 World Trade Center bombing — is invalid.

But Jordan has gone further than that.

Jordan signed the International Convention for the Suppression of the Financing of Terrorism, which went into effect in 2002.

Article 2, paragraph 1(b) defines terrorism for the purposes of the treaty: 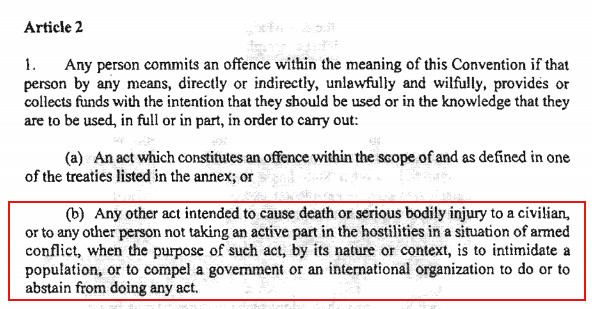 This seems like a standard definition of terrorism, which is what one would expect in an agreement meant to put a stop to the financing of terrorism.

But Jordan would have none of it.

But at least, unlike the Palestinian Arabs, the Jordanians registered their disagreement upfront:


“1. The Government of the Hashemite Kingdom of Jordan does not consider acts of national armed struggle and fighting foreign occupation in the exercise of people’s right to self-determination as terrorist acts within the context of paragraph 1(b) of Article 2 of the Convention…Accordingly, Jordan is not bound to include, in the application of the International Convention for the Suppression of the Financing of Terrorism, the offenses within the scope and as defined in such Treaties.”

Imagine signing a treaty to fight terrorism and then registering a complaint that sometimes killing innocent civilians is a right.


With regard to the declaration made by Jordan upon ratification:

…The Government of the Kingdom of the Netherlands recalls that, according to Article 19 (c) of the Vienna Convention on the Law of Treaties, a reservation incompatible with the object and purpose of the Convention shall not be permitted.

It is in the common interest of the States that treaties to which they have chosen to become party are respected, as to their object and purpose, by all parties and that States are prepared to undertake any legislative changes necessary to comply with their obligations under the treaties.

Jordan is consistent in its determination to defend the use of terrorism, whether to keep Hamas terrorist Ahlam Tamimi out of the hands of the US, whose citizens she murdered — or to curtail the applicability of international treaties which it signs, thwarting the war against terrorism.

So much for being an ally in that war.

The Palestinian government is also playing games, only more sloppily. They have made no attempt at a formal declaration of any reservations they may have to any of the treaties they sign. They signed onto the Convention on the Elimination of All Forms of Discrimination against Women in 2014, but it wasn’t until just last month that their Supreme Fatwa Council came out with a statement that they do not accept it. Who knows how many other signed treaties the Palestinians intend to ignore.

Another treaty the Palestinians have signed onto, according to Al Jazeera, is the Vienna Convention on the Law of Treaties.

According to the Vienna Convention on the Law of Treaties, there is a procedure for a country to follow when withdrawing from a treaty, a fairly commonsensical one: notify the other parties to the treaty. 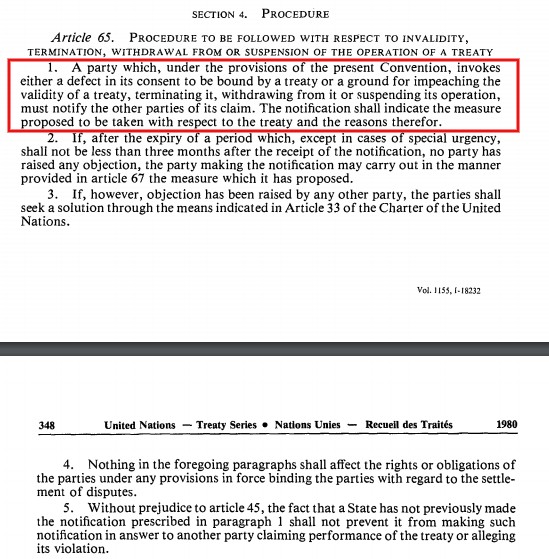 It took them 5 years to get around to mentioning they have a problem with the treaty, and even then they could not be bothered to formally register their reservations.

Bottom line, one thing that Jordan and the Palestinian leaders have in common is contempt for international law.