“Benjamins” are, of course, slang for $100 bills since Benjamin Franklin is pictured on them.

But there is another link between Benjamin Franklin and antisemites – the so-called “Franklin prophecy.”

Award-winning Lebanese author/writer, Ayad Mowsley, invoked the antisemitic “Franklin Prophecy” in an  article in Al-Binaa newspaper today, and wrote an entire article about it last month.

Like the Protocols of the Elders of Zion, it is a forgery, pretending to be the text of a speech Benjamin Franklin gave at the Constitutional Convention of 1787.

There is a great danger for the United State of America. This great danger is the Jew. Gentlemen, in every land the Jews have settled, they have depressed the moral level and lowered the degree of commercial honesty. They have remained apart and unassimilated; oppressed, they attempt to strangle the nation financially, as in the case of Portugal and Spain.

For more than seventeen hundred years they have lamented their sorrowful fate — namely, that they have been driven out of their mother land; but, gentlemen, if the civilized world today should give them back Palestine and their property, they would immediately find pressing reason for not returning there. Why? Because they are vampires and vampires cannot live on other vampires –they cannot live among themselves. They must live among Christians and others who do not belong to their race.

If they are not expelled from the United States by the Constitution within less than one hundred years, they will stream into this country in such numbers that they will rule and destroy us and change our form of Government for which we Americans shed our blood and sacrificed our life, property and personal freedom. If the Jews are not excluded within two hundred years, our children will be working in the field to feed Jews while they remain in the counting houses, gleefully rubbing their hands.

I warn you, gentlemen, if you do not exclude the Jews forever, your children and your children’s children will curse you in their graves. Their ideas are not those of Americans, even when they lived among us for ten generations. The leopard cannot change his spots. The Jews are a danger to this land, and if they are allowed to enter, they will imperil our institutions. They should be excluded by the Constitution.

Arab antisemites love this; it has been quoted by Fatah and Osama Bin Laden. I’ve quoted it in Arab media before. 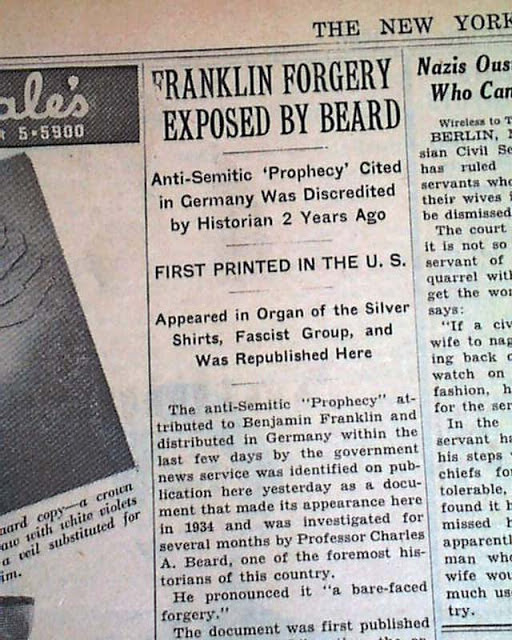 Franklin was a friend of the Jews and contributed money to the Mikveh Israel synagogue in Philadelphia.

The Franklin Forgery shows that it is impossible to actually stop antisemitic myths. Haters will reprint them forever, no matter what the facts are, and gullible haters in waiting love to eat it up.