Now that Ilhan Omar has made the topic of the Jewish Lobby’s supposed stranglehold on US politicians kosher to speak about again, the New York Times has to write an article meant to confirm the thoughts of the worst antisemites about Jews.

I don’t know, let’s see: AIPAC put everything it had to stop the Iran nuclear deal – and lost. Does that sound like it is all powerful to you?

While the article mentions that as an aside, the tone of the article answers the question as a resounding “yes.” It features a single AIPAC activist among many thousands, and says (without directly quoting him) that he wants to “punish” Ilhan Omar for her antisemitic statements.

Shouldn’t every moral person condemn antisemitism? Why does the NYT want to make it look like the powerful Jews are working to “punish” those who are critical of the Jews for being too powerful?

Even worse, the same activist is pictured – not knocking on the doors of members of Congress, but praying with a talit and tefillin. 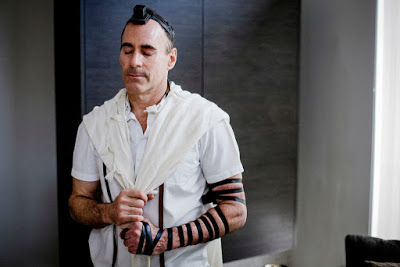 Because the dog-whistle of AIPAC being the Jewish lobby was apparently too subtle for the New York Times editors. They had to show him do something really, really Jewy, just to get the message across that yes, the Jews are the ones who are controlling the US government.

The Times uses another worn journalistic trope of using a question to imply something is true, but the question form gives it plausible deniability:


Has Aipac — founded more than 50 years ago to “strengthen, protect and promote the U.S.-Israel relationship” — become too powerful? And with that power, has Aipac warped the policy debate over Israel so drastically that dissenting voices are not even allowed to be heard?

The question is too ridiculous to be taken seriously. No one is muzzling J-Street, or IfNotNow, or Jewish Voices for Peace, or the months of “Israel Apartheid Week” on campuses, or the BDS movement. No one.

But the Newspaper of Record is using the question format to say, yes, those tefillin-wearing Jews are indeed stopping all conversation of criticism of Israel.

By doing that, the New York Times is implicitly agreeing with Omar that there really is no antisemitism coming from the Left, only criticism of Israel that is supposedly being silenced by people saying that her statements are antisemitic. Even though they are and no one – no one at all – is trying to silence legitimate criticism of Israel.

Every paragraph is dripping with implicit insinuations of AIPAC doing something underhanded, even though nothing adds up to anything beyond what any other lobby does. For example:

Aipac does not lobby on behalf of Israel; it is sensitive about being characterized as an agent of a foreign power, as Ms. Omar suggested it was during her talk in Washington last week. But it almost always sides with the Israeli government, no matter who is in charge.

Perhaps because Israel is a democracy and the choice of its voters should be respected if you want to support the Israel-American relationship? The significant Jewish lobby of J-StreetPAC specifically lobbies against virtually all Israeli government policies, which would – in a normal reading of the situation – mean that AIPAC respects democracy and J-Street does not. This paragraph implies that American should oppose Israel’s government policies, democracy be damned.

The newspaper even quotes known AIPAC hater MJ Rosenberg, who says that Omar is entirely correct in how she characterizes the organization.

In short, Omar has legitimized the false charge that the Jewish lobby owns Washington, and the New York Times pretty much agrees, somehow without fear of that Jewish lobby that is supposed to shut down all dissent.

Omar has managed to mainstream antisemitism, and to use the New York Times’ methods of using a question to make a statement:

Has the New York Times legitimized Omar’s antisemitic claims that the Jews control Congress, that they have hypnotized the world, that they prioritize Israel over America, and that any criticism of Israel is considered antisemitic by those Jews?

Whether the newspaper meant to or not, the answer is clearly yes. This was irresponsible journalism done in an irresponsible way, without context and – with that photo- providing fuel to Jew-haters.