One minute they’re telling us that the term “antisemitism” is being thrown around indiscriminately, and others claim they consider being called an antisemite as a badge of honor.

Now, the media and the politicians are very concerned about antisemitism in the US, and warn us not only about an unprecedented rise in Jew-hatred, but have also pinpointed the source as being the election of Donald Trump as president.

Bethany Mandel nailed it when she wrote already back in November after the election, that Only Because Of Trump Did The Media Suddenly Care About Anti-Semitism. This was before it became popular to describe an “unprecedented” “wave” of antisemitism bordering on a “pandemic”.

Today, the national media seems to report every apparent antisemitic attack. Before the election that same media was far more selective. Back in October, swastikas, the words “SS” and “Heil Hitler” were spray painted at the entrance to the Temple Beth Shalom Cemetery in Westchester. If you don’t recall hearing about it, that is because while it was reported in the local media, the national media apparently missed it.

Or perhaps the outrage over antisemitism was not yet in vogue? 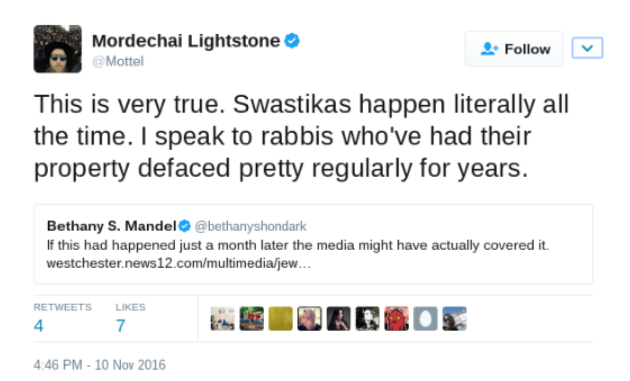 Jason Friedman, a security expert dealing exclusively with Jewish institutions for the Community Security Service, is not convinced that there has been “a dramatic increase in antisemitic events, rather than a big increase in the reporting of and on such events.”

Along with the undereported story in Westchester, last year there was a foiled bombing attempt at a Florida synagogue and explosives were thrown at the homes of two Lubavitch rabbis in New York. Despite the property damage and intent to cause physical harm, neither attack received much media coverage.

One of the first to write about the media’s selectiveness about reporting about antisemitic attacks is Seth J. Frantzman, who points out that the more than 7,000 antisemitic incidents under Obama were mostly ignored by the media.

He notes that based on  ADL data, there were an average of 84 antisemtic incidents each month during the Obama administration, as opposed to 95 incidents between January and February of 2017. Yet, while that is a 10% increase, it does not support the narrative that there has been a wave of antisemitism sweeping the US under Trump.

Looking at the broader picture, it turns out that during the Obama years from 2009 to 2015, there were:

The national media apparently missed the fact that:

Yet the media liberally tosses around the label “antisemite” at Trump, Bannon and others, while applying it as a warning of an increasing threat.

But there is more than just an issue of exaggeration and alarm. Although he agrees there is an increased threat — bordering on a pandemic — Malcolm Hoenlein, head of the Conference of Presidents of Major American Jewish Organizations warns:


We have to be very careful — and it’s a warning you cannot exaggerate — about using the label antisemite. It’s a very powerful accusation. If you demean it, if you make it commonplace, you remove the strength of the accusation. It has to be used carefully and only when you can substantiate it. And it should be reserved for occasions when it is really necessary.

It is a warning that neither the media, nor Trump’s Democratic opponents, have taken to heart.

But the narrative has been successful. A recent survey showed a surge in the percentage of Americans who see antisemitism as a serious problem, with 70% of Amerian voters seeing it as either a “very” or “somewhat serious” problem. That is a 43% increase from the 49% who saw it as a problem just a month ago.

Yet, the problem is not merely the sudden interest of the media, and of Trump’s political opponents, in antisemitism. The problem is that when the media reports on antisemitism, they are actually targeting low hanging fruit — threats and vandalism.


an idea to be celebrated while the actual people who embody it are destroyed. For proof, look no further than Linda Sarsour, one of the organizers of the massive Women’s March, protesting the inauguration of Donald Trump: Having raised tens of thousands of dollars to help rebuild a Jewish synagogue [actually, a cemetery] desecrated by anti-Semitic vandals in St. Louis, she thinks nothing of siding with Islamic Jihad operatives or embracing convicted terrorists who have murdered two young Jewish men. To our progressive betters, this is not a problem: They embrace Judaism but have no problem with those who kill Jews. Platitudes are offered, power is preserved, and the parade of folly goes on.

This is the same Linda Sarsour who describes herself on Twitter as a “racial justice and civil rights activist,” except when it comes to those critical of Islam’s attitude towards women —

The issue here is Sarsour’s defense of the Jewishness of dead, buried Jews while at the same time embracing terrorists dedicated to the destruction of the Jewish state. It is a mentality that allows for a convicted terrorist like Rasmea Odeh to be welcomed by women’s groups.

But this reflects a larger problem in the women’s movement itself. In a 2013 article, Gil Troy writes about women’s activist Betty Frieden, who already noticed in 1975 how the feminist movement was being coopted by anti-Zionists and antisemites during the International Woman’s Year World Conference hosted by the United Nations. The passing of General Assembly Resolution 3379 later that year, labeling Zionism as a form of racism, energized Frieden and others who suddenly saw themselves not only as feminists, but also as Jews and Zionists.

Ten years later, by the time the 1985 conference convened in Nairobi:


In the middle of yet another dreary debate about Zionism and racism, a French woman began chanting: “The women of the world are watching and waiting.” Others joined in, until the PLO and the Iranian delegates finally relented. Representatives of 157 countries, many teary-eyed, many singing the conference’s unofficial theme song “We are the World, We are the Women,” unanimously adopted a final document with, Betty Friedan exulted, “every reference to Zionism gone.” The first major international movement to declare Zionism to be racism, the women’s movement now became the first to denounce that lie. Six years later, in 1991, the General Assembly repealed its infamous resolution.

It was a victory, though not a complete one, as Sarsour’s position today as a leading feminist will attest. Today we can see antisemitism and anti-zionism being incorporated in movements such as Black Lives Matter and on college campuses around the country, where Jewish students face various forms of intimidation.

But on this antisemitism the liberal national media is mute.

This is more than an issue of cheapening the meaning of the term by attempting to pin it on the Trump administration. Nor is the problem limited to the sudden focus on antisemitic threats and vandalism only now that Trump has taken office. Just as the UN has been coopted to target Israel, movements dedicated to human rights have been similary hijacked, as well as the colleges — and this threat still flies under the radar of the media.