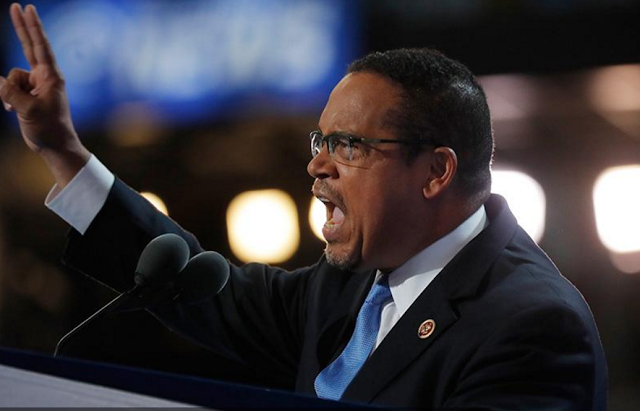 The nomination of Keith Ellison to be the head of the Democratic National Committee has resulted in two remarkable stories over the past couple of weeks.

The first one was the Anti Defamation League’s initial statement of support for him, discounting Ellison’s history of anti-Israel and antisemitic statements, especially when he was involved in the Nation of Islam group.

A few days after a firestorm of criticism, the ADL released a more nuanced statement about Ellison (and pretended that they issued that statement simultaneously with the initial praise of him:)

While he has stated his support for Israel and a two-state solution, Rep. Ellison has taken the other side at critical moments. He voted against the US providing supplemental funding for Israel’s anti-missile Iron Dome program at the very time that Hamas missiles were raining down on Israeli civilians. He has criticized Israel’s naval blockade of Gaza, ignoring Israel’s legitimate security concerns. He supported the JCPOA despite strong Israeli resistance to the deal. And it is unclear that he would oppose efforts by the Palestinian Authority to undertake unilateral measures to achieve statehood in the short-term, a surefire recipe for disaster in the long-term.
These positions alone raise questions about where Rep. Ellison would take the party. As chairman, would he ensure that the Democratic party prioritize its historic support for the Jewish state? In the event of a future conflict, would he ignore Israel’s legitimate security considerations? We do not know the answers to these questions, but their intersection with other trending issues raise even more concerns.

Then, the Investigative Project unearthed a much more recent speech that Ellison made, after he was already a member of Congress, which was unabashedly antisemitic as he claimed that US policy was entirely driven by Israeli Jews:

The United States foreign policy in the Middle East is governed by what is good or bad through a country of seven million people. A region of 350 million all turns on a country of seven million. Does that make sense? [A male says “no”]. Is that logic? Right? When the people who, when the Americans who trace their roots back to those 350 million get involved, everything changes.

And that wasn’t all that he said as a member of Congress:


A year earlier, as conflict raged between Israel and Hamas in Gaza, Ellison told Al Jazeera that “the people who have a strong sympathy for the Israeli position dominate the conversation. It is really not politically safe to say there have been two sides to this.”
A month later, Ellison told the BBC that outreach to Hamas was not feasible for a member of Congress – not because it is a terrorist organization with an anti-Semitic charter demanding Israel’s destruction – but because it is too politically risky.
“What I can tell you now is that the constellation of political forces in the United States at this moment would make a member of Congress who has reached out directly to Hamas spend all their time defending that decision and would not be able to deal with other critical issues that need to be focused on. So for example if I were to make a move like that I wouldn’t be able to focus my attention on the humanitarian issue. I’d have to defend myself to my colleagues why I reached out to a terrorist organization. It would absorb all of my time. I would spend a lot of time fighting off personal attack and would not be able to achieve goals that I have.”
Just after the 2009 Gaza war, Ellison was among 22 House members to vote “present” rather than take a stand on a nonbinding House resolution “recognizing Israel’s right to defend itself against attacks from Gaza, reaffirming the United States’ strong support for Israel, and supporting the Israeli-Palestinian peace process. Ellison claimed he was “torn” on the issue because it “barely mentions the human suffering of the Palestinians in Gaza.”

And, of course, Ellison was one of a handful of members of Congress to vote against funding for Israel’s Iron Dome, a purely defensive weapon against Hamas rockets.

After these latest revelations came out, the ADL finally woke up, however reluctantly:


Rep. Ellison’s remarks are both deeply disturbing and disqualifying.  His words imply that U.S. foreign policy is based on religiously or national origin-based special interests rather than simply on America’s best interests. Additionally, whether intentional or not, his words raise the specter of age-old stereotypes about Jewish control of our government, a poisonous myth that may persist in parts of the world where intolerance thrives, but that has no place in open societies like the U.S.

On December 2, J-Street released a statement that not only supports Ellison, but it accuses his critics – including the ADL – of being anti-Muslim!


Rep. Ellison is and has long been a friend of Israel, a champion of pro-Israel, pro-peace policies and an admirable elected official whose thoughtful and considered leadership has shown deep respect for Jewish values and the Jewish people.

Attempts to paint Rep. Ellison as anti-Israel or anti-Semitic aid a concerted and transparent smear campaign driven by those whose true objections may be to the Congressman’s religion, strong support for the two-state solution and/or concern for Palestinian rights. These opponents seek to unearth the slightest inartful statements from decades in public life, take them out of context and use them as a weapon to silence responsible and important voices like Rep. Ellison’s.

J-Street refers to Ellison’s antisemitism as “the slightest inartful statements.” His unwavering criticism of Israel is simply “concern for Palestinian rights.”

J-Street claims to be pro-Israel, yet it cannot find a single example in Keith Ellison’s long history of supporting antisemites and terrorists that gives the group the slightest pause. Not one.

J-Street’s hypocrisy doesn’t end there. In their statement they claim that pro-Israel groups are trying to “silence” critics of Israel. So J-Street calls for them to be silenced!

The recent spate of attacks on Rep. Keith Ellison’s record of support for Israel and the Jewish community need to come to an end. It is time to retire the playbook that aims to silence any American official seeking high office who has dared to criticize certain Israeli government policies.

J Street believes that this recurrent process undermines our ability to have open, honest and productive conversations about Israel and the Middle East in our national politics, and that it does deep and lasting damage to the American Jewish community.

In other words, J-Street – knowing it has no possibility of winning the debate on Ellison based on his actual statements – calls for his critics to stop criticizing him. Because they are the ones who should be silenced, not anti-Israel and antisemitic rhetoric.

This episode crystallizes J-Street perfectly: it isn’t interested in open debate, but in silencing anyone who supports Israel.

One thing is clear: J-Street is exactly as pro-Israel as Ellison is.