Today and tomorrow, the US State Department is holding the first government conference ever on the topic of online antisemitism.

As Elan Carr, U.S. Special Envoy to Monitor and Combat Anti-Semitism, writes in The Hill:

Anti-Semitism online is ideologically diverse. Haters from the far-right far left utilize similar tactics, misusing modern media to spread the ancient hatred with unprecedented speed and reach. The adage has never been truer: “A lie can travel around the world and back again while the truth is lacing up its boots.”
Some foreign governments compound the crisis, using their state apparatus’s full force to spew anti-Semitic disinformation at home and across the globe.
A recent European study found that radicalization to the point of violence is accomplished much more quickly on the internet than through face-to-face interaction.
The results can be devastating. We have seen murderous attacks on synagogues and schools, vandalism of community buildings, relentless harassment of Jewish university students, and acts of terrorism from those radicalized to violence. The type or source of threat may vary by region and country, but no part of the world has been entirely spared the scourge.
Americans understand that we cannot legislate hatred out of existence, nor can we purge it from the internet. Our bedrock First Amendment protection of freedom of expression means that even despicable speech cannot be subjected to government censorship or punishment.
But much more can be done to counter the vicious hatemongers. We must address this urgent challenge by creating working alliances among social media giants, ethnic and faith communities, human rights advocacy organizations, and governments. Our conference aims to begin forging such alliances and crafting practical policy solutions.

The conference program (as well as the article above) shows that the conference is looking at all sources of antisemitism, Right and Left as well as militant Islamic. 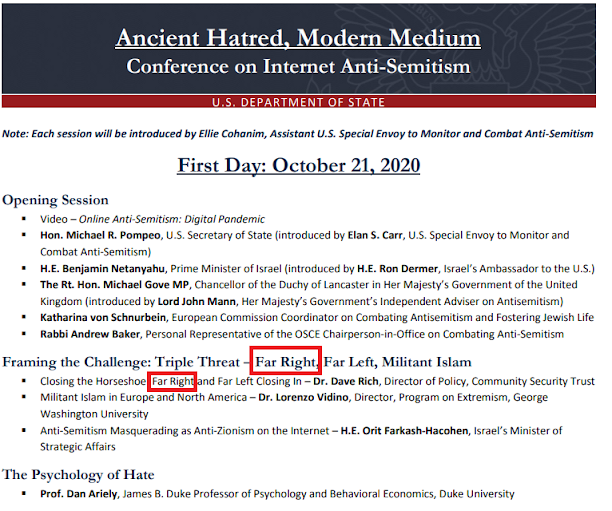 But the most popular charge that the Left makes against the Right – besides calling them “Nazis” – is to claim that Christian Zionists like Mike Pompeo are really antisemites. as Mairav Zonzsein does here:

This theme that Christian Zionists are all antisemites who are working behind the scenes to arrange a world war that will usher in the Rapture is a mantra among the Left. In fact, there is an entire online conference on that exact theme tomorrow, featuring such noted non-experts on Christian Zionism as Linda Sarsour and Peter Beinart, sponsored by this group: 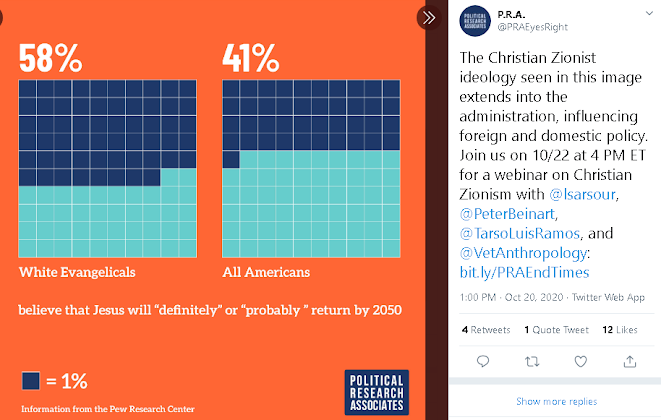 Saying that Christians believe in their messiah coming means that they will try to force it to happen is quite a logical fallacy. (It is interesting that these people have no such fears about Iran forcing the coming of their own messianic Mahdi, a topic that the Ayatollah explicitly discusses all the time.)
These same Leftists can’t quite bring themselves to acknowledge that President Trump is the first president since Gerald Ford who has not initiated a war action.
Nor do they want to talk about Trump’s own accomplishments in fighting antisemitism, listed by Carr in the Hill article:

President Trump has made combating Jew-hatred a top national priority. The administration designated a violent white supremacist group as a terrorist organization, ensured Holocaust education for future generations of schoolchildren, issued an executive order protecting besieged Jewish college students, sent senior government delegations to stand with survivors of violent anti-Semitic attacks in Pittsburgh, Poway, Jersey City, Brooklyn, Halle, and so many other places, and strongly supports the State of Israel against those seeking to delegitimize the Jewish state.

The Left was AGAINST most of these initiatives and made fun of the rest, showing that they are more interested in fighting Trump no matter what he does than in fighting antisemitism of any type.