Middle Eastern Studies recently published an interesting paper called “The star of David in a cedar tree: Jewish students and Zionism at the American University of Beirut (1908–1948)” by Caroline Kahlenberg.

Through it we learn that the first regular female graduate from AUB was Sara Levy, from Palestine: 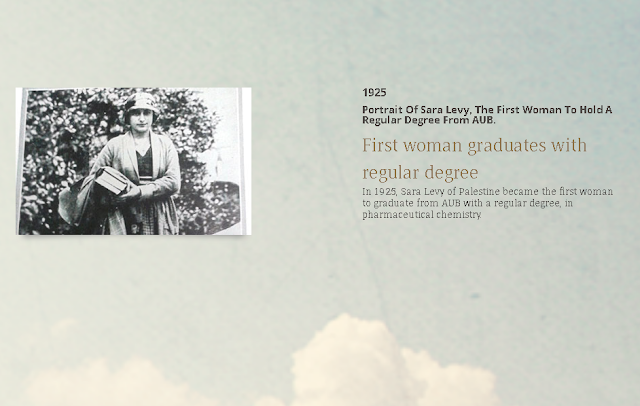 She was at AUB at the same time as two other Jewish women, Fortune Azriel from Haifa and Aida Goldenberg from Kiev and a former student at the American School for Girls in Cairo.

Goldenberg ended up dropping out, and Azriel graduated from dental school in 1926. She married a professor at AUB, Samuel Appelrot, and they lived in Beirut for a while at least. (I see a Samuel Appelrot had lived in Haifa in 1965 so chances are they moved back to her hometown when life for Jews became precarious in Lebanon.)

AUB tried to attract Jews, including from Palestine, advertising that they were exempt from attending classes on Saturday, availability of kosher food and a synagogue. There was a Jewish student group, the Kadima Society, where the Jews could hang out.

Here was one incident from 1938 that showed that the university’s support of Jewish students only went so far:

On 2 November 1938, AUB students observed Balfour Day – a ‘day of mourning’ – by wearing black ribbons. In response, a number of Jewish students wore Zionist colors – blue and white. According to the Palestine Post report, ‘threats of violence were used on the Jews to force them to remove their ribbons’, and one student at the International College, Dani, was ‘attacked and fired at, but not hurt’. As a result, Dani left the college. The Palestine Post printed a verbatim letter following the incident from the principal of the International College, Archie S. Crawford to Dani’s uncle, Nessim Angel, who was himself an AUB alumnus. In the letter, Crawford wrote that Dani’s actions of wearing Zionist colored ribbons on Balfour Day was unprecedented among AUB students. Crawford acknowledged students’ right to express themselves but ultimately criticized this form of Zionist expression:

[Dani] has every right to wear this color or any other ribbon, but it was a tactless thing to do so on this particular day which was being observed as a day of warning by the greater proportion of our student body.

In 1948, Arab students continued attacking and threatening the Jewish students.

When this decision was brought before the University Senate later that week (in which a few Jewish faculty were present), it apparently received much discussion and perhaps pushback, as many members expressed their views on AUB’s relations with the Lebanese government and ‘the principle of academic freedom and the aims and purposes of the University’.

Two days later, on 14 January 1948, there was a student demonstration in morning chapel services. As Crawford reported to the Executive Committee, a group of Arab students came to AUB’s Vice President ‘demanding the expulsion of Jewish students, who are nationals of nonArab States’. The Vice President apparently had to take ‘measures… to protect the lives of Jewish students and ensure their safety’. In response, Crawford planned to meet with the group of Arab students and ‘impress upon them the principles involved in their behavior and in their relation to the University’. Two weeks later, the Executive Committee voted to authorize Crawford to gather the fathers of those students and discuss with them the ‘threatening attitude and misbehavior of their sons’.

The Jewish population at AUB plummeted after this.