The Islam Wars: It’s The Shiite Turn
Dr. Mordechai Kedar
In the fight which rages on for over a thousand years, the Sunnis were always the dominant segment of Islam. The collapse of the national Arab countries, the retreat of the US and the strengthening of Iran are changing the balance of power, with much more blood to be spilled along the way.
Are we watching the wheels of history turn? We may be. In the terrible war between Sunnis and Shiites, the former always had the upper hand. Now however the situation seems to be changing.
When Muhammad the prophet of Islam closed his eyes forever in 632 AD, his relatives began the fight for his succession. His cousin, Ali Ibn Abi Talib, who was also Muhammad’s son-in-law after marrying his daughter Fatimah, claimed that the rule should be his by right, and that Muhammad himself promised him the succession. The other candidates marginalized his claims, forcing him to struggle for 24 years before finally ascending and becoming the 4th caliph in 656 AD.
But even then his respite was short. The governor of Damascus – Mu’awiyah Ibn Abi Sufian – betrayed him six years later. In 661 Ali was murdered and Mu’awiyah became the 5th caliph. The sons of Ali continued to fight, and the new caliph fought back, hard. In 680 Hussain, the son of Ali, was murdered and had his head displayed in Damascus. The Muslims who support Ali and his successors are the Shiites, and those who support the people who pushed them aside and eliminated his succession, are Sunnis.
This 1,384 year old fight is threaded throughout the history, philosophy and politics of Islam. The fight takes place in many arenas, from the scriptures to the prayers, from religious laws to people’s names. But most of all, it takes place in the actual battlefield. These battles have cost many millions of Muslim lives, with mutual massacres taking place during various periods.
The decline of the Sunnis
The war between Iraq under the Sunni Saddam Hussein, and Iran under the Shiite Khomeini between 1980-1988 cost the lives of some million people and injured many more millions. The fight continues today at full force in multiple arenas: Syria, Iraq, Yemen, Lebanon, Pakistan, Afghanistan etc. Saudi Arabia is the leader of the Sunni world today, and Iran leads the Shiites.
About 85% of the Muslims in the world are Sunnis, making the Shiites a 15% minority. This state of affairs resulted in the Sunnis typically being the winners and in control, while the Shiites are defeated, praying and hoping for their lot to change someday. The Shiites’ miserable state of affairs brought them to call themselves “Al Mustadafin” – a term from the Koran meaning “The depressed upon the earth”. They prayed and hoped that one day the tide will turn and they will have the upper hand.
In recent years it seems that the Shiites prayers are being answered. The 1979 revolution in Iran gave the Shiite religious leaders a large, strong and rich country from which they can export their revolution to the rest of the world. They did so by sending propaganda, education, money and books to every country in which Shiites live, aiming to strengthen their anti-Sunni emotions. Once the hearts were ready, the arms, ammunition and military training weren’t far behind. Wherever possible, Shiites built the potential for taking over the government.
The world has seen this. Other countries understood the Ayatollahs’ plans for control, but chose to ignore what they saw. They did it because oil and gas were a higher motivator than any other consideration, including the safety of entire countries and the state of peace in the world. Under the world’s watchful eye, Iran developed rockets, tanks, guns and fighter planes, chemical and biological weapons, and even atomic weapons. There were attempts to stop Iran’s military expansion, but Iran’s friends in the security council – Russia and China – ensured that it can continue its takeover of the islamic world without interruptions.
In 2003, The US toppled the Shiites biggest and most dangerous enemy, Saddam Hussein.
The Ayatollahs viewed this as confirmation that Allah is on their side, giving them the aid of both global powers – Russia in the security council, and the US in Iraq. The Ayatollahs continued their nuclear program despite sanctions that were imposed on them, and their perseverance, combined with the flimsy US foreign policy has brought about the 2015 nuclear agreement. The billions of dollars that the Ayatollahs received since, and that have been well invested in the various killing fields across the middle east, have shown the Ayatollahs that the road to the top of the world is at their feet. 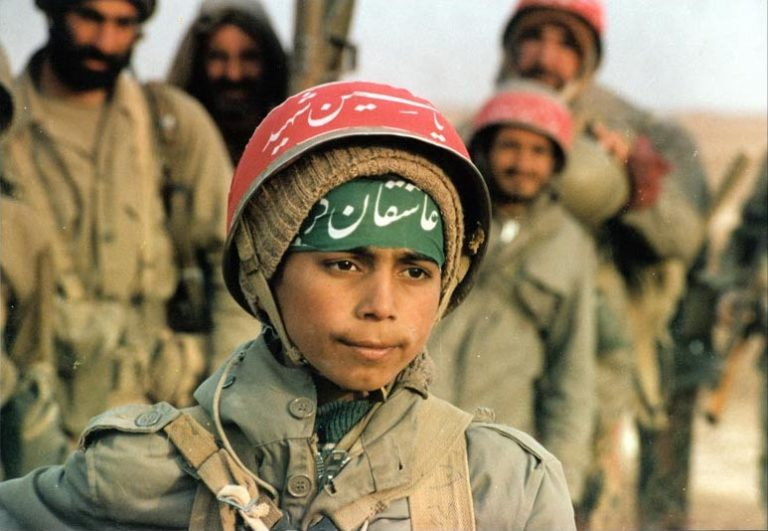 95,000 Iranian children were hurt or killed during the Iran-Iraq war. Source: Wikimedia Commons
With the aid of the western world and its war on Saddam Hussein, the Shiites managed to wrestle Iraq from the Sunnis. Today, with the aid of the Christian Russians they will wrestle Syria from its Sunni majority. The Shiites are massacring the Sunni population mercilessly, as we’ve seen in recent months in Fallujah, Ramadi, Haleb and Yemen, and are now advancing on Mosul, Iraq’s financial capital.
In the last two years, the Sunni “Islamic State” controlled Mosul, butchering Shiites left and right. Now that the city is under siege, the Shiites are sharpening their knives, ready to take their revenge on the Islamic State and all Sunni citizens for generations of abuse.
A cultural climate of violence
It is very sad to see how a 1,400 years old conflict still sheds rivers of blood in that part of the world. The fight is horrific because it has no boundaries – neither geographical nor moral – and because everything is known in advance: It is clear that there will be a massacre in Mosul. The question is only how big: dozens? hundreds? thousands? tens of thousands? Unknown as of yet, but I have no doubt that there will be a massacre.
You’d expect that people who got exposed to alternate lifestyles will adjust their behavior. Even if Iraqis don’t live in Europe, they still were watching TV, listening to the radio, reading books and newspapers and had plenty of opportunity to see how people live in places like the US and Europe. They were exposed to the material advantages and the happiness that can be pursued and achieved in western countries. Moreover, when most middle-easterners travel to other locales, whether to visit or to migrate, they adopt, by and large, their host country’s customs. There are always exemptions as we saw in Germany during the new year celebrations, however most Arab migrants have no problem adapting new behaviors, suggesting that there is no genetic or racial problem.
The problem raises its head when they are in their homeland, with their culture of violence and extermination of enemies. Here only the fittest survive, and the weak is in dire straits indeed. Here conflicts don’t get resolved – they get enshrined and will continue for as long as both sides exist. Here, a conflict gets resolved when one side gives up, gives in or is obliterated.
Here is also where Israel is trying to survive, and it’s not an easy task. On the one hand, Israel is an island of Western culture and a full democracy, meaning that it can not treat its enemies the way they treat each other; On the other hand, if Israel will behave by the moral codes that are prevalent in post-WWII Europe, the Jews in Israel will be booted back to Europe post haste.
This is complex dilemma, and the debate rages on in the Israeli public. It will continue for as long as Israel fights to exist in the Middle East, due to the chasm between the culture we would love to be, and what we need to do.