Today is the International Day of Solidarity with the Palestinian People, as declared by a 1977 UN General Assembly resolution.

The date was specifically chosen to coincide with the anniversary of the 1947 UNGA Resolution 181 that called for a partition of Palestinian into a Jewish and Arab state. As the UN webpage for the day says, “The International Day of Solidarity with the Palestinian People is observed annually on or around 29 November, solemnly commemorating the adoption by the Assembly, on 29 November 1947, of resolution 181 (II), which provided for the partition of Palestine into two States.”
November 29 was a day of celebration for Jews, as the UN recognized the necessity of a Jewish state in Palestine.
But it also handed the Palestinian Arabs their own independence from colonial Ottoman and British rule. If they would have accepted partition, they would have been given their own state . They would have been able to celebrate their 73rd anniversary this year.
Instead, Palestinian Arabs – and the entire Arab world – violently rejected the partition resolution and started a war within hours of the vote, threatening a “holy war” and  “massacres” of Jews not only in Israel but throughout the Arab world. 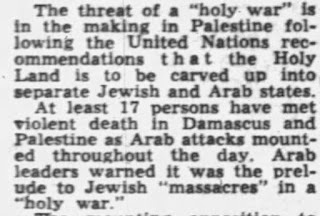 Clearly, there was little desire for a Palestinian Arab state. The anger, threats, and terror attacks in 1947 were to stop a Jewish state, not to create a Palestinian Arab state.
By choosing November 29 as the International Day of Solidarity with the Palestinian People, the UN is extending the genocidal intent of the Arabs in 1947. It has nothing to do with the desire for a Palestinian state, but for the destruction of the Jewish state. That choice of date is a deliberate insult to Jews.
It is notable that in 1977, when the resolution was made, Palestinians were still best known as international terrorists. And barely four months after this resolution, Yasir Arafat’s Fatah murdered 38 Israeli civilians including 13 children in the Coastal Road Massacre. The UN called for solidarity with murderers and terrorists against Israel, not for them to build a state.
Similarly, “Nakba Day” is not the date of any massacres, or military defeats, or expulsions, but it is tied with the date Israel declared independence. Nakba Day commemorates a “catastrophe” because that was the first full day of independence for Israel.
Both the Day of Solidarity and Nakba Day give a message that is anti-Israel, not pro-Palestinian. They say that any days that Jews celebrate are days of mourning for the world.
The outbreaks of Arab violence in Palestine before 1947 were generally not aimed at throwing off colonial rule or agitating for a Palestinian Arab state. The violence was all primarily aimed at the Jews – against Jewish immigration, against Jewish land ownership, against Jewish nationalism.
Think about the Palestinian “red lines” for accepting peace with Israel:  control of the Old City of Jerusalem, ethically cleansing Jews from Judea and Samaria, insisting that millions of Arabs have the right to “return” not to a Palestinian state but to the hated Jewish state, releasing terrorists who have attacked Jews from prison. Not one of them is a prerequisite for a state. All of them, however, are deliberately intended to weaken the Jewish state and Jewish ties to the Jewish historic homeland.
A look at the last 140 years of modern Zionism shows a consistent pattern of the Arab desire to destroy Jewish nationalism, and Palestinian nationalism has been only a facade to help accomplish that goal when military means failed.
Everything in Palestinian Arab history is consistent with the idea of destroying Israel as a Jewish state, including Oslo. This is why even today Palestinians deny any Jewish connection to the land – to Hebron, to Jerusalem, to Bethlehem – and why they rewrite history to erase the core of Jewish ties to Eretz Yisrael.
November 29 is not a day of solidarity with Palestinians. It is another attempt to destroy Jewish nationalism.