Kudos for Yisrael Medad noticing this piece of hypocrisy:

You do realize that “our days of old” refers to the Temple?
On the Temple Mount?
In Jerusalem?@epieprz @MalkahFleisher @Joshhasten @elderofziyon

The real irony comes when you juxtapose that song with what Rabbi Jill Jacobs, also of T’ruah, wrote about Jews ascending to the Temple Mount on Tisha B’Av today:

As someone who is 21+ hours into fasting in commemoration of the destruction of the Temple (I’m in Israel) I am also mourning the loss of our holiest site. But those who choose to go up to the Temple Mount today are there to provoke & endanger Jews & Muslims on holy day for both. https://t.co/7PQ9CzFv3s

Wow! She is congratulating herself on fasting (something I have done nearly 300 times, I guess that makes me wonderful!) and claiming she is mourning the loss of the Temple – at the same time that she is casting aspersions on Jews who wanted to visit their holiest spot today. the very site of that Temple, to meditate and even pray, claiming they are only interested in causing a scene.
Sorry, Jill. You don’t mourn the Temple’s destruction. You contributed to it, in spirit. The Second Temple was famously said to be destroyed by “sinat chinam,” baseless hatred against one’s fellow Jew. By falsely claiming that those who yearn to visit Judaism’s holiest site are only wanting to cause trouble, you are contributing to sinat chinam.
You are also lying.  As I reported on Friday, Muslims were preparing to riot to stop Jews from being allowed to visit the Mount on Tisha B’Av. Muslim leaders called to close all Jerusalem mosques today – on Eid al Adha! –  just to force Muslims to go to Al Aqsa and pack the area with more potential cannon fodder.
I have followed Jews visiting the Temple Mount for years now, and I have joined them twice. I’ve watched hundreds of videos of Jews on the Mount. I have not once seen them act provocatively towards the Muslims in even the slightest way. Not even a smirk.
By claiming that they are trying to cause trouble, you are the one who is acting directly contradictory to how a rabbi should act.
The closing word we recite in the end of Lamentations are indeed “הֲשִׁיבֵ֨נוּ הֹ’ ׀ אֵלֶ֙יךָ֙ וְֽנָשׁ֔וּבָה חַדֵּ֥שׁ יָמֵ֖ינוּ כְּקֶֽדֶם”,

“Turn us unto You, O LORD, and we shall be turned; renew our days as of old.” This is calling to rebuild the Temple.

Does T’ruah really want the Temple to be rebuilt? Do they want animal sacrifices? Do they want a Kohen Gadol? Every Jew visiting three times a year? A sovereign religious Jewish state? A Passover sacrifice per family?

And if they don’t – are they really mourning the Temple today?

My suspicion is that the answer is an emphatic “no” to all those questions. 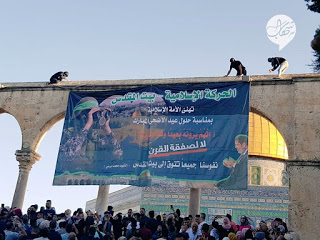 Spare us you self-congratulatory 21 hours of fasting, Jill. This isn’t what the religion asks of you. It asks that you actually treat your fellow Jews as family, that you give them the benefit of the doubt, that you don’t look at people with kipot visiting the most sacred spot in history and think they are criminals and troublemakers – while saying that the Muslims who have subverted and taken over this area, placing Hamas banners on the Mount on the very day we mourn the destruction of the Temple on that spot, are somehow righteous.