Sanders surrogate Amer Zahr has never tried to hide his hatred for Israel, and like most anti-Zionists, he thinks it’s perfectly fine to talk about the Jewish state pretty much like the Nazis talked about Jews. But in order to illustrate how fanatic Zahr is, a few pictures are worth a thousand words.

Zahr isn’t shy about announcing his agenda: getting rid of the world’s only Jewish state. 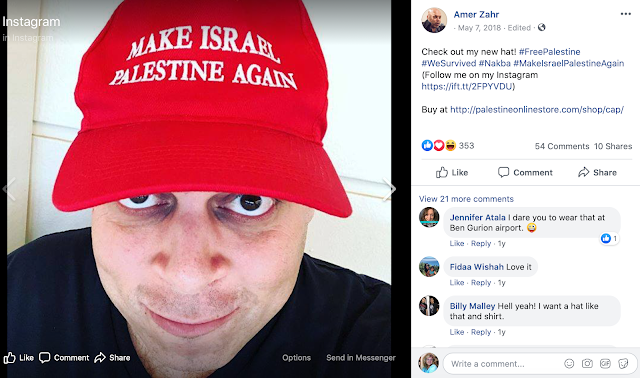 While Zahr will usually proclaim that his Palestine from the river to the sea should be democratic, secular and open, his current Facebook cover photo reflects a different vision: Palestine is Muslim and Christian, Judaism is erased.

Another photo Zahr used as his Facebook cover reveals his support for terrorism: it shows him serenading convicted supermarket bomber and US immigration fraudster Rasmea Odeh. (Here is another photo of Zahr and Odeh having a jolly good time together; and last year, Zahr posted a photo of notorious terrorist Leila Khaled for International Women’s Day. He also seems to be an admirer of the Tamimis, whose most celebrated family member is Sbarro massacre mastermind and facilitator Ahlam Tamimi.) 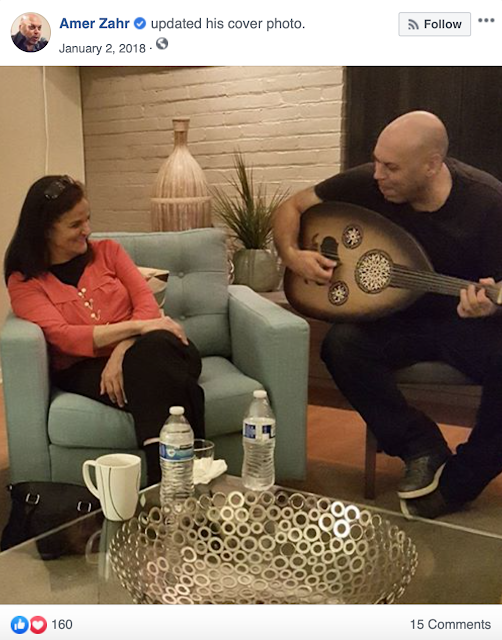 For Zahr, the perhaps most uncomfortable aspect of his great-grandfather’s remarkable story is that, due to his political pragmatism, he was regarded as a “collaborator” in some circles. A very interesting article entitled “The Intimate History of Collaboration – Arab Citizens and the State of Israel” discusses Hillel Cohen’s book “Good Arabs” and claims that Israeli officials admired Hawari’s “charisma” and sponsored him, hoping he would be able to establish a new anti-communist Arab party:
“In the higher echelons of collaborative politics, the state sponsored public figures such as Archbishop George Hakim as anti-communist leaders. Another sponsored anti-communist was Muhammad Nimr al-Hawari, founder before 1948 of the al-Najjada paramilitary brigades. Because al-Najjada participated in the fighting against the Zionist militias, but also because Hawari negotiated with Haganah to avoid fighting in Jaffa, by the end of the war he became a refugee in Lebanon. Admiring his charisma, Israeli intelligence decided to allow his return to Israel in 1950 as an alternative anti-communist leader. The idea was that Hawari would establish a new Arab popular party. Based on reports of collaborators from within Maki [Israeli Communist Party], Cohen covers the fascinating struggle between Hawari and the communist organization, which ended with the former’s defeat. When politics failed, Hawari became a judge in the municipal circuit court in Nazareth.”
As a judge and public figure, Hawari was apparently greatly respected: a 1969 photograph from Israel’s National Library shows him as one of the prominent members of a council that was established to investigate the devastating fire that was set by a mentally ill Australian tourist at the Al-Aqsa mosque. 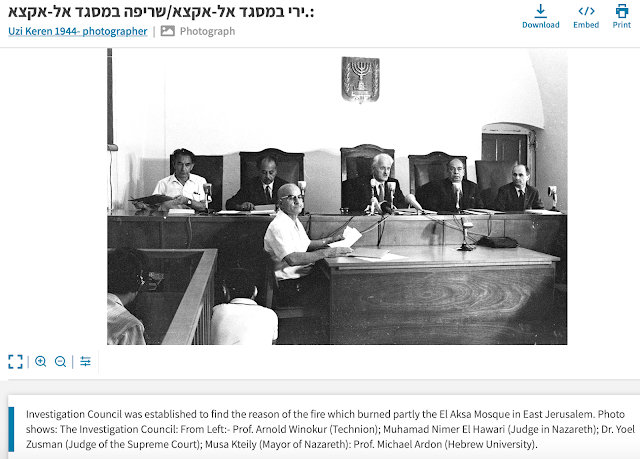 If Amer Zahr wasn’t a bigoted anti-Israel activist, he could be very proud of his great-grandfather.
[…to be continued with a post exploring why Zahr was born in Jordan, even though his mother had emigrated from Israel to the US]