Check out their Facebook page.
By Gree Vance, Professor of Literature, Bumblethuck College 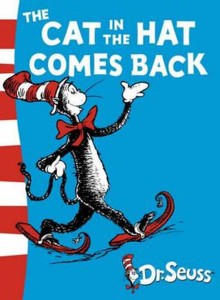 New York, February 27 – Theodore Seuss Geisel earned numerous plaudits for his children’s books, but a new examination of one of his better-known works reveals a dark undercurrent of racism, Islamophobia, and support of ethnic cleansing of Palestinians by colonialist Europeans under the pretext of Jewish self-determination.
Other scholars have already provided academic treatment of the first book in the series, The Cat in The Hat (1957), notable among them: Uppjørs (1977), who perceived Freudian themes; Dissin-Terry (1980), who explored the recurring motif of Eurocentric anthropomorphism in gestalt as symbolized by the fish, the nameless mother figure, and the large red box; and the deconstructionist feminist modalities as brought to bear on the text and imagery by Blecch (1996). None of these, however, gave thorough treatment of the sequel The Cat in the Hat Comes Back (1958), and none of them touched on the glaring use of Zionist, colonialist, anti-Palestinian, Islamophobic, and Jewish-supremacist in the latter work. This article aims to fill that void.
Seuss’s name itself provides the first indication of intersectional problematics qua problematics, in that the author consciously uses a German surname coupled with the honorific “Dr.,” a term that invites association with the established Jewish reverence for practice in the medial field; Seuss thus a priori plants in the unsuspecting reader’s mind – it is a children’s book – the notion that doctors, especially Jewish ones, should be trusted, effectively ignoring those doctors involved in the harvesting of Palestinian organs.
In general, The Cat in the Hat Comes Back traffics in classic racist assumptions, chief among them the notion that white, as represented by the snow, must remain free of color, represented by the bathtub ring. Disaster, in this Zionist racist view, occurs when the snow takes on color, as the European colonialist Zionists try to “cleanse” Palestine of peoples of color and only barely tolerate the Jews of color among them.
Each of the devices the characters employ in turn to effect this cleansing reflects a historical or ongoing motif in oppression of Palestinians: the bathtub, a reference to the Baath Party of Iraq under Saddam Hussein and of Syria under the Assad family, oft-cited justifications for Zionist supremacist militarism; mother’s white dress, yet another example of feminine whiteness needing protection from other races, but also the appropriation of Palestinian dress and other elements of indigenous Palestinian culture such as falafel and hummus; the wall, which references both the racist Apartheid separation barrier and the claim that Jews have any rights to the al-Buraq wall surrounding Haram al-Sharif, calling the latter the “Temple Mount” and the wall the “Western Wall” of a fabled non-Khazarian structure of ancient irrelevance; Dad’s $10 shoes, a dual reference to the control Jews exert over the world economy and the known Mossad tactic of stealing Palestinian activists’ footwear; and the rug in the hall, which serves as a metaphor for Zionist ambitions to seize all the lands of the region, including Iran, the home of Persian rugs.
The indoctrination and justification of ethnic cleansing continues with the “stain” transferred to the bed, an endorsement of the dehumanizing of Palestinian women inherent in IDF soldiers refusing to rape them; then, when he Zionists alone cannot effect the cleansing they aim to achieve, they must rope in other outsiders such as the US, represented by the 26 little cats whose efforts only bring further mayhem, and whose efforts to commit genocide prove unsuccessful as the oppressed Palestinian population of color continues to multiply.
In the end, much like the Zionists of our world, the characters in the book can only preserve whiteness by annihilating enemies in a cataclysmic blow, reminiscent of Israel’s nuclear weapons and its ongoing efforts to prevent peace-loving countries such as Iran from attaining.