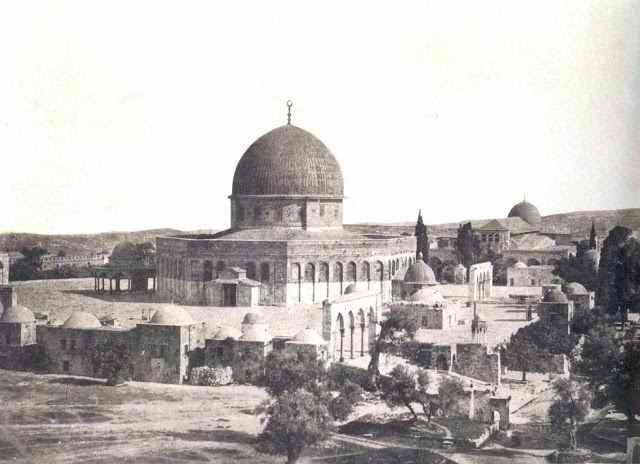 I am reading an academic paper named “Making Jerusalem the centre of the Muslim World: Pan-Islam and the World Islamic congress of 1931.” by N. E. Roberts.

It shows, as we have mentioned before, that Jerusalem was never an important part of Islamic thinking until the 1920s with the rise of the infamous antisemite (and later Nazi collaborator) Hajj Amin Husayni as the Grand Mufti of Jerusalem.


Although Jerusalem was the third holiest city in Islam, it was not an important concern of Pan-Islamists in the late-nineteenth and early-twentieth centuries. Historically, the city had been peripheral to Islamic politics, having never been the capital of a major Islamic power, nor the site of a leading institution of Islamic learning, nor a prominent city in the Ottoman empire. So, while Muslims worried about the fate of Istanbul, Mecca, and Cairo, little sleep was lost over the status of Jerusalem, even while European interest in the Holy City increased in the late-Ottoman period.

The British were worried about the rise of pan-Islamism, and officials were divided on how to deal with it. They made a fatal mistake in thinking that they could use Islam as a means to keep the Muslims content without them engaging in political activities.

In Palestine, British officials such as Ronald Storrs (1881–1855), the governor of Jerusalem, and Herbert Samuel (1870–1963), the high commissioner, identified the Husaynis as the notable family best placed to serve as intermediaries between the government and the country’s majority Muslim population. Their decision to embrace the Husaynis occurred shortly after the occupation of Palestine, when Storrs and Samuel cultivated friendly relations with the mufti Kamil al-Husayni who they viewed as being reliably pro-British and having the requisite influence and experience to exercise leadership over the local population. The government’s support for this family helps explain why they supported Hajj Amin al-Husayni becoming the mufti of Jerusalem following his older brother’s death in March 1921, despite the young man’s lack of religious qualifications and his participation a year earlier in violent anti-Zionist demonstrations during the Muslim Nabi Musa (Prophet Moses) festival in Jerusalem. It would also lead the government to place Hajj Amin at the head of the newly invented Supreme Muslim Council (an autonomous institution that oversaw the religious affairs of the Muslim community) so that he could function as the ethnarch of the Muslim community during the mandate period.

The event that started Husayni’s embrace of Jerusalem as a rallying cry for Muslims was – a British idea:

When Herbert Samuel appointed Hajj Amin as mufti and promoted him to the head of the powerful Supreme Muslim Council he did so with the expectation that he would run the religious affairs of the Muslim community and keep the peace within his constituency. However, for this quid pro quo arrangement to work smoothly, the British needed Hajj Amin and his organisation to concentrate solely on local religious matters. But barely a year into Hajj Amin’s administration, British officials gave the mufti the perfect vehicle for involving himself in Pan-Islamic politics: a mission to the Muslim World to raise funds for the renovation of the Dome of the Rock.

The idea to renovate the Dome of the Rock originally came from Herbert Samuel who, in August 1920, wrote to Lord Curzon to request that the British government provide funds to renovate the Haram al-Sharif. Noting that the site was the third most important sacred site in Islam, he explained that the ‘effect’ of this act of magnanimity ‘would be favourable and instantaneous.’ There was just one problem: if the British repaired the site, Muslims might protest that Britain was taking over an Islamic space, a particular concern of the Indian government given that the Khilafat Committee had already used Britain’s control over Muslim holy places to propagandize against empire. As a result, the high commissioner of Palestine, the secretary of state, and the viceroy of India decided that it would be better for Hajj Amin al-Husayni to lead the campaign to repair the site with Britain providing background technical and financial assistance.

As the paper details, the Mufti immediately started fundraising to repair the Dome- in order to protect it and Jerusalem from being taken over by the Jews. (The paer says “Zionists” but the Mufti was not shy about his antisemitism.)

The entire reason the Dome of the Rock is so ubiquitous in Palestinian political life today is because the British thought they would get goodwill from the Arabs of Palestine if they helped repair the long-ignored site. Instead, it was used to fuel antisemitism and create Palestinian nationalism – which were, and remain, joined at the hip.

This is an early example of something we have seen over and over: Westerners think that when they do something magnanimous for the Arabs, the Arabs would reciprocate with goodwill and cooperation – and the results are  the exact opposite.

One cannot downplay how many people have been killed in the century since this decision by the Jewish Herbert Samuel and the British Empire.