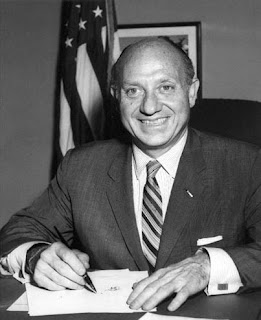 Senator Jacob Javits, on March 23, 1960, gave a speech before Congress where he summarized the Arab boycott against Israel. Here are some excerpts where Javits makes it clear that the boycott is not anti-Zionist, but antisemitic.

One of the gravest and most threatening problems in the situation is the Arab boycott and blockade of Israel. This boycott is illegal, a violation of the U.N. Charter and of international law; because it has not been stopped, it has grown into full-scale economic warfare-not only against Israel, but against the free world as well. Its corrupting influence has fouled up the channels of world trade and commerce, subjected American business firms and business-men to discrimination on religious grounds, and involved the U.S. Government in the Suez Canal problem as well as in several embarrassing situations.
This Arab boycott tried to prevent businessmen from trading with Israel, and air and shipping lines from serving Israel, by threatening them with reprisals and blacklists. They are not only prohibited, according to the boycott, from trading in Arab countries, to use Arab ports, and to enjoy the other usual courtesies and rights, but also they may not be owned or operated by Jews.
While the Arab governments respect a decisive position, they exploit weaknesses; they did not retaliate when several European governments, among them Switzerland, West Germany, the Netherlands, brushed aside Arab boycott demands and vigorously rejected Arab threats of reprisal. On the other hand, the list of American firms and individuals affected by the Arab boycott continues to grow.
Arab pressures were so strong that some companies yielded to their demands. The major American and British oil companies have yielded to Arab boycott demands. Passengers on cruise ships and American airlines on Near East routes are advised that those of Jewish faith will be denied tourist privileges in certain Arab ports and stopping points. A number of American freighters have been put on the Arab blacklist because they had business dealings with Israel.
Yesterday the Lions International was reported placed on the Arab blacklist. This morning I learned that the Studebaker-Lark Corp. and the International Business Machines Corp. have also been placed on the Arab boycott list. A number of our moving-picture actors, actresses, and singers are on the Arab blacklist, and the showing of their films or sale of their records is prohibited because they either are Jewish or appeared at a Jewish fund-raising function. The New York State law against employment discrimination was invoked against Aramco because the oil company refused to hire Jews in its New York offices out of deference to Saudi Arabia where its wells are located and which supports the Arab boycott. And there is also the economic problem created by counter boycott action against firms which have succumbed to Arab pressure.