Some two weeks ago, Yair Rosenberg showed in a Tablet article how anti-Israel activists and Jew-haters used a tweet about a pre-Passover toast by Israel’s deputy foreign minister Tzipi Hotovely to claim that “Israeli Foreign Ministry officials are literally toasting yesterday’s event [i.e. a chemical attack on civilians] in #Syria.” As Rosenberg noted, “this latest blood libel is a reminder, if one was needed, of the enduring nature of anti-Semitic tropes, which somehow find ways to adapt to new mediums and situations without shedding their essential characteristics.”
Even though many of the people who responded to the tweet pointed out that the toast was for the holiday, the tweet has remained up; other users tweeted similar versions and also left their tweets up despite being told that the toast was for Passover. 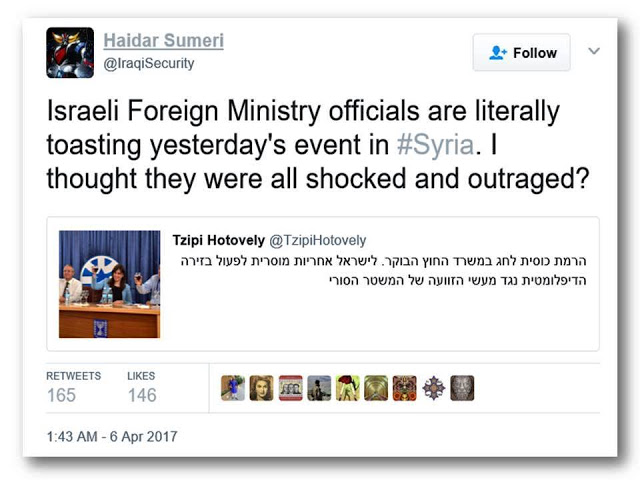 Unsurprisingly, among those who retweeted this new blood libel was Rania Khalek, though she quietly canceled her retweet after she was called out for it on Israellycool.
But Khalek couldn’t remain abstinent for long, and eventually she retweeted the view of notorious Assad apologist Sharmine Narwani that “Syria was targeted for destruction” so that Israel could push for a recognition of its annexation of part of the Golan Heights. 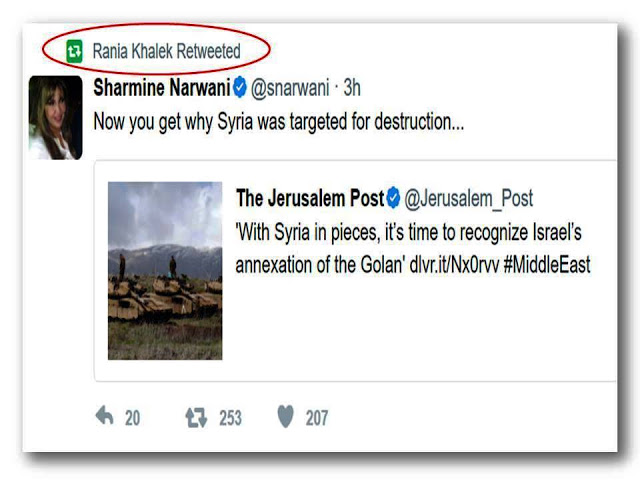 Khalek’s friends and former colleagues at the Electronic Intifada (EI) weren’t idle, either: they published a post by the vile David Sheen under the title “In Israel, the eliminationist camp is already in charge.” 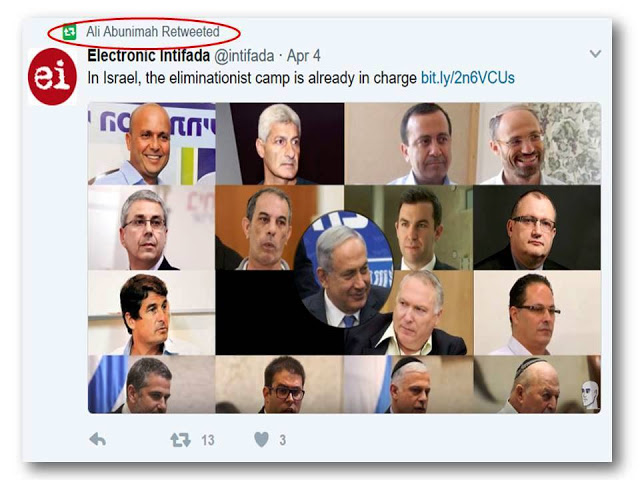 Another EI tweet promoted Sheen’s post by insinuating that Israel was conducting a “campaign against African babies”. 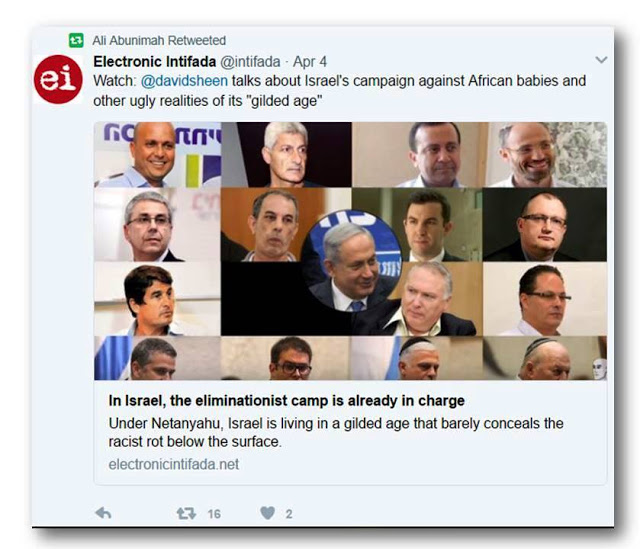 In his relentless quest to demonize Israel, Sheen promotes in this post a video of a “lecture” in which he claims to present “some of the seediest scandals that plagued Israeli society in 2016.” As he notes: “Many of these were covered extensively by The Electronic Intifada and by this writer specifically, but otherwise received little attention from other media outlets.” Worried that promising coverage of Israel’s “seediest scandals” might not be enough to get EI fans to watch all of the video, Sheen urges his readers to really watch “the entire 90-minute lecture,” though he warns that doing so “all in one sitting can be somewhat exhausting and even deeply depressing as it contains a list of horrific crimes and the human suffering they cause.”
However, some of the almost 2000 people who did watch Sheen’s “examination of Israel’s state-sponsored race wars against indigenous Palestinians and African refugees” since it was posted on March 21 apparently felt it was a rather rewarding experience.
Commenter Khurram Aziz praised Sheen for his “excellent” work and promised to send his video “to all Dutch media outlets;” he also sympathized with Sheen’s complaint that the media were neglecting Israel’s evils, but had an explanation: “virtually all MSM news outlets including Reuters, and even Alt Media (Controlled Opposition) are under control of Rothschild Zionists and the partners in crime the Jesuits of the Vatican!”
Aziz also noted that as a musician, he observed “in the Jazz scene here in I💜AMSterdam and NY, a preponderance of Jewish musicians hogging the limelight […] admittedly very good in their own way, but clearly this is the result of the Hidden🔯Hand in the Music Industry.﻿”
Aziz was so enthusiastic about Sheen’s work that he left several additional comments. 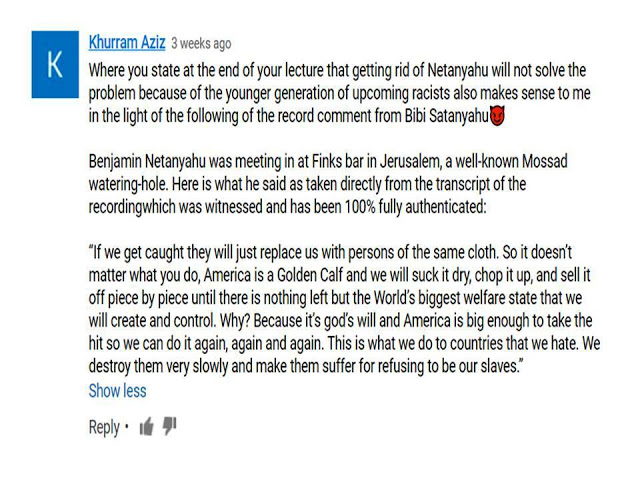 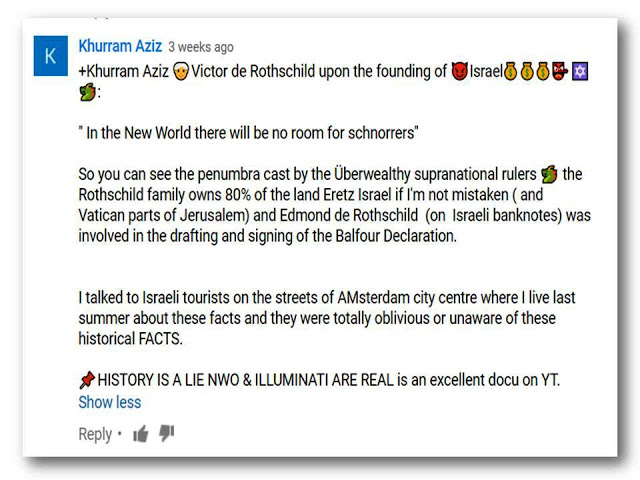 Sheen got some more comments from fans of his work. 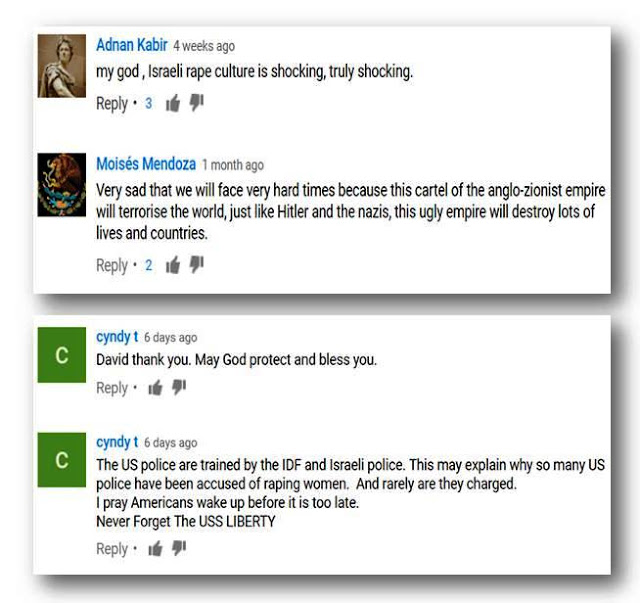 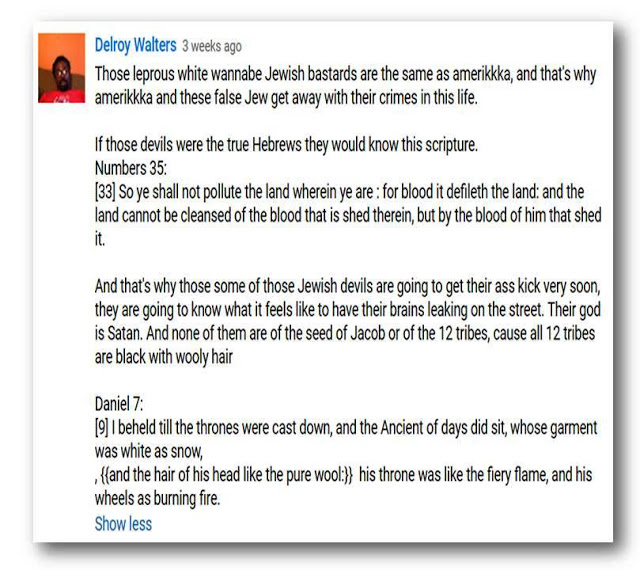 Clearly, David Sheen’s most enthusiastic fans get his message. For the rest of us, anti-Israel activists like Sheen, Khalek and Abunimah as well as their fans are a reminder that the Jew-hatred that is reflected in the centuries-old blood libel still has plenty of proponents in the 21st century.