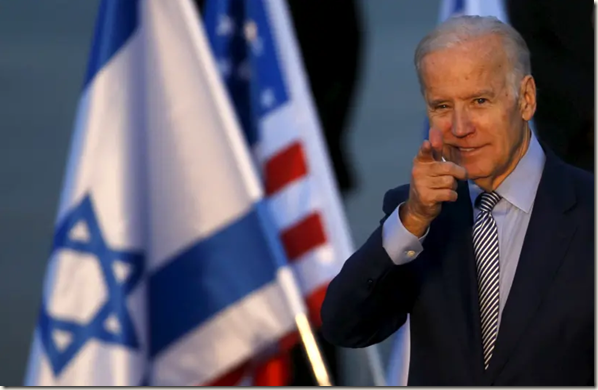 Progressive activists are making a last-ditch effort to convince the Democratic Party and its presumptive presidential nominee Joe Biden to denounce Israel’s occupation of the West Bank, disputed territory where the U.S. ally administers military law over millions of Palestinians.

In a new statement, advocates say the Democratic platform should use the word “occupation” for the first time in reference to the Israeli-Palestinian conflict. Campaigners argue that approach would be in keeping with Democrats’ commitment to social justice, growing sensitivity to Palestinians’ concerns and increasing skepticism of hardline Israeli policies encouraged by President Donald Trump.

“Condemning the Israeli occupation by name should be the bare minimum for any leader of the Democratic Party,” the coalition wrote. “We urge the [Democratic National Committee] Platform Committee to have the courage to correctly name the situation on the ground — a necessary precursor to taking meaningful action that can hold the Israeli government accountable for ongoing violations of human rights and international law.”

The message comes after the Democratic National Committee’s platform drafting committee voted to advance the language for the platform on Wednesday. It has not yet been made public. But a draft platform viewed by HuffPost does not mention “occupation.”

The platform’s Israel plank — a draft of which was obtained by Jewish Insider on Wednesday — includes language that expresses support for the U.S.-Israel alliance, a commitment to security funding for Israel and support for the two-state solution “that ensures Israel’s future as a Jewish and democratic state with recognized borders and upholds the right of Palestinians to live in freedom and security in a viable state of their own.” The platform also notes opposition to “unilateral steps by either side — including annexation — that undermine prospects for two states” and opposition to “settlement expansion.”

…On the issue of Jerusalem, the Israel plank states, “We believe that while Jerusalem is a matter for final status negotiations, it should remain the capital of Israel, an undivided city accessible to people of all faiths.” The language expresses opposition to “any effort to unfairly single out and delegitimize Israel, including at the United Nations or through the Boycott, Divestment, and Sanctions Movement, while protecting the constitutional right of our citizens to free speech.”

The Daily Beast adds another detail:

The draft platform, which was approved out of committee before a final vote, states that Democrats “recognize the worth of every Israeli and every Palestinian” and support a “negotiated two-state solution.” It staunchly opposes the boycott, divest, and sanction movement, but also says it qualifies as constitutionally protected speech.

The current language is very close to J-Street’s position, although that group expressed concern over the lack of language about “occupation.”

The 2016 DNC platform said this about Israel:

A strong and secure Israel is vital to the United States because we share overarching strategic interests and the common values of democracy, equality, tolerance, and pluralism. That is why we will always support Israel’s right to defend itself, including by retaining its qualitative military edge, and oppose any effort to delegitimize Israel, including at the United Nations or through the Boycott, Divestment, and Sanctions Movement.

We will continue to work toward a two-state solution of the Israeli-Palestinian conflict negotiated directly by the parties that guarantees Israel’s future as a secure and democratic Jewish state with recognized borders and provides the Palestinians with independence, sovereignty, and dignity. While Jerusalem is a matter for final status negotiations, it should remain the capital of Israel, an undivided city accessible to people of all faiths. Israelis deserve security, recognition, and a normal life free from terror and incitement. Palestinians should be free to govern themselves in their own viable state, in peace and dignity.

This means that the new platform has still gone significantly Leftward on Israel, by adding language opposing “annexation” and “settlement expansion” and explicitly opposing laws that call BDS discriminatory.

It is also unclear what the proposed new platform says about Iran. the Democratic Majority for Israel, which has been lobbying for the more Zionist side of the new platform, has written in an email to supporters that they want language  to “work to ensure Iran does not obtain nuclear weapons through diplomatic means” which implies removing sanctions and downplaying Iran’s violations of the JCPOA.

Questions about whether the Democratic Party supports keeping the US Embassy in Jerusalem, or Israel’s control of the Golan Heights, or even the IHRA definition of antisemitism and including antisemitic discrimination as a reason for schools to lose federal funding – all important Trump initiatives – are apparently not addressed.

Jewish and Zionist voters need to know the Democratic Party position on these matters.