In February, the Israeli Ministry of Strategic Affairs released a truly damning report, detailing the huge number of ties between terrorist organizations and “peaceful” groups that support BDS.

By far the terror group that does this most is the PFLP, the Marxist terror group that was not only active in the 1960s and 70s with several high profile airplane hijackings but also in the 2010s with the Jerusalem synagogue massacre of 2014, which the PFLP claimed responsibility for, and a drive-by shooting in 2015, killing one.

The Marxist background of PFLP makes one wonder if this strategy of laundering terrorists as leaders in “non-violent” NGOs was part of an old Soviet plot to destroy Israel from many angles.

The Palestinian Center for Human Rights is regarded as a reliable and fair NGO by the world. Amnesty has used it for much of the information in their (discredited) Gaza Platform.

But Jaber Wishah, Deputy Director of the PCHR Board until 2017, was in charge of
the PFLP military wing. He was sentenced to two life sentences and served 15 years in
prison (1985-1999). 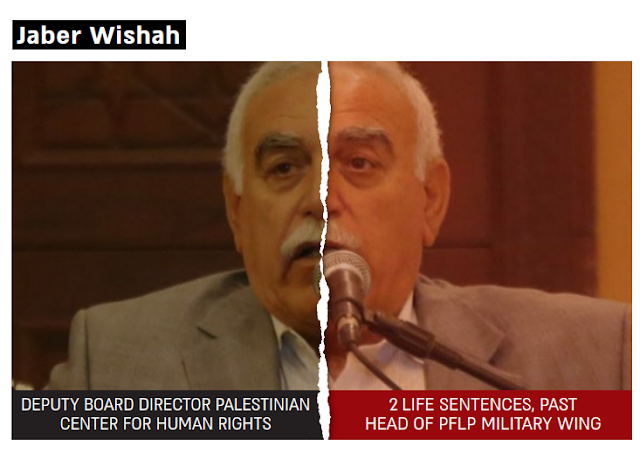 Wishah – again, in a major position for a human rights NGO- eulogized Samir Kuntar, the child murderer who is one of Israel’s most reviled terrorists.  Wishah wrote that Kuntar “was an example for all the world’s dignitaries in the struggle against evil, and that there are thousands following in Samir’s footsteps today.”

Wishah isn’t the only problematic person at PCHR.

PCHR Director-General Raji Sourani and Director of the Legal Department and Legal Aid Program, Iyad al-Alami, both maintained ties with Hamas (as of 2017). The two provided legal aid and consultation to Hamas, collecting materials and writing documents for the terror group’s use in legal proceedings against the State of Israel.