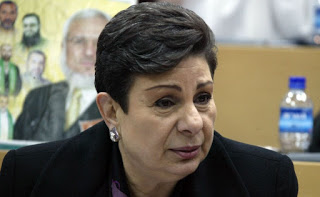 “The results of the Israeli elections were a clear expression of the spread of a culture of hatred, racism and extremism in Israel,” she was paraphrased as saying by Palestinian media.

But she’s not the only hypocrite who suddenly pretends to care about racism. A leader of the Islamic Jihad terror group likewise called Israelis racist. Dr. Muhammad al-Hindi, a member of the Political Bureau of Islamic Jihad, said that “racism is rampant in the state of the Zionist entity, where everyone is racing to annex the West Bank and brag about the numbers of martyrs they kill.”

Saeb Erekat said, “Netanyahu chose to perpetuate the pillars of the conflict and the spiral of violence, extremism, chaos and bloodshed, and thus requires that the region and its peoples live with the sword.”

The PFLP said, “The election results are a clear expression of the racist Zionist society.”

It is interesting how much these terrorists, Jew-haters and inciters of terror sound exactly like the “progressive” groups when talking about Israel. Their talking points are pretty much identical.