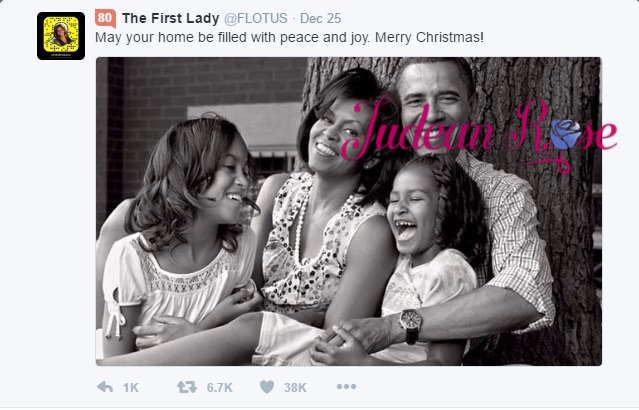 1) He did it on Shabbos. Many people will read this and say, “What do you mean Shabbos? He did it before Chanuka!”

They’re not wrong. Obama pushed the resolution to a vote before a Jewish holiday as if to twist the knife in that much deeper. Roseanne Barr has pointed out the similarity here to how the Nazis operated during the Holocaust.

Barr’s point is valid. The Nazis purposely scheduled the deportation of Jews from the Zychlin Ghetto to the Chelmno camp to take place on Purim, March 3, 1942. Half a year later, Amon Goeth and his SS-men took 50 Jews from their barracks at Auschwitz and shot them dead. Because it was Yom Kippur.

But there is another point to make and that is that the Jewish Sabbath takes precedence over most holidays and certainly over Chanuka. It’s the holiest day of the week. And it’s the day that observant Jews take a break from all media.

By pushing the vote through on the Sabbath, Obama effectively rendered mute the people most affected by this resolution: the ones who see yishuv haaretz (settling the land) as fulfilling God’s will; the ones who set Jerusalem above their chiefest joy (Psalms 137:5-6). He, Obama, made it illegal for Jews to live in Jerusalem or pray at the wall. And he did that on the holy Sabbath day, while they were out of contact with the wider world. It is sneaky, evil, and underhanded.

“The vote is not the real story here. The more damning action of the Security Council occurred after the voting, when all the members stood and clapped at the results.”

Rabbi Kahana draws a comparison between the behavior of the Philistines before Samson’s final heroic act (Judges, chapter 16) and the behavior of the Security Council to the State of Israel. The Philistines ridicule Samson and are said to be in “high spirits.” By the same token, says Rabbi Kahana, “The clapping at the end of the vote at the Security Council disparaged, denigrated, belittled, trivialized, ridiculed and discredited the Jew and the Jewish State. . .

Amen. Can’t be soon enough for this gal.

3) The smiling Obama Christmas photo POTUS tweet. Nothing like tweeting a photo of the Obama family wearing self-satisfied smiles, because hey! O just screwed the Jews! (And any day that happens is a holiday in the Obama White House)

May your home be filled with peace and joy. Merry Christmas! pic.twitter.com/ZfJKus2SsV

4) Alan Dershowitz telling us that Obama is the worst president ever. Dershowitz has been everywhere since the lead up to the resolution, playing up to the cameras, writing articles, giving interviews. And we should listen to him because? He voted for the man?? Stumped for him TWICE?

“He called me into the Oval Office before the election and said to me, ‘Alan, I want your support. And I have to tell you, I will always have Israel’s back.’ I didn’t realize that what he meant was that he’d…stab them in the back.”

Funny. Because a lot of us who didn’t go to Harvard did know he’d do exactly that. We tried to tell you, Alan. Do we now have to listen to you tell us just how bad he/this is?

5) Obama ran roughshod over American tradition by doing something lame ducks just don’t do. Seth Frantzman wrote a comprehensive list of abstentions by the U.S. on anti-Israel resolutions. This writer checked each abstention. Not one abstention occurred during a president’s final month in office. To break with longstanding U.S. policy during the lame duck period is just not done. Basically this is Obama thumbing his nose at America and its longstanding presidential tradition.

6) No one called the Arabs out for their ongoing terror during the Security Council meeting.

7) No one called the Arabs out for refusing to negotiate during the Security Council meeting.

8) The media paints Israel the violent party. Writing about the reaction of the Israeli government to the U.S. abstention, Washington Post writer Ruth Eglash characterizes MK Naftali Bennett as a “more-militant” voice (which by default must make Netanyahu at least “somewhat militant”):

“Netanyahu’s anger was matched by more-militant voices in his right-wing coalition.
“Education Minister Naftali Bennett, head of the ultranationalist Jewish Home party, held a news conference at the Western Wall in Jerusalem, one of Judaism’s holiest sites, saying the city has been the capital of Jews for 3,000 years.”

What  is it that makes either of these government figures “militant?” Is holding a news conference at the Western Wall “militant?” Are Netanyahu and Bennett militant because they think Jews should be able to live in Jerusalem? Pray in Jerusalem?

The answer, of course, is that neither one of them is militant. The tag reflects only the Washington Post’s bias, or at least that of Ruth Eglash.

But hey, it’s Chanuka. And Chanuka is when we Jews remember stuff. We remember our victory over the Greeks. We remember getting our Temple back. We remember regaining our religious freedoms and ridding Jerusalem of Hellenist culture.

Chanuka is a time to ponder all God’s miracles for us. Oil, for instance, that lasted way longer than it possibly could. Not to mention, the disappearance of a powerful culture.

Yes! We outlived the Greeks.

And we’ll outlive Obama, too.

Meantime, I rather enjoy imagining him being struck by lightning. Repeatedly. (A girl can dream.)