TOP NEWS
http://elderofziyon.blogspot.com/2018/01/take-two-bassem-tamimi-on-his-daughter.html
By Petra Marquardt-Bigman
In a post entitled “The Tamimi masterclass on media manipulation,” I documented some two years ago in considerable detail that Bassem and Nariman Tamimi (i.e. the parents of Ahed Tamimi) feel completely free to tell credulous reporters invented stories that depict them and their children as innocent victims of Israeli brutality. The specific incident I investigated also showed that – even when it comes to her own children – Nariman Tamimi’s grim philosophy is “Either victory or martyrdom.”
A recent example shows Bassem Tamimi displaying a similarly cold-hearted fanaticism – but only for Arab audiences. Thanks to an admirer of the Tamimis, we can watch clips with English subtitles (h/t @kweansmom) from an interview that Bassem Tamimi recently gave to the Lebanese media network Al Mayadeen. According to Wikipedia, the network’s “editorial policy emphasizes that Palestine and resistance movements wherever they are found are its point of reference” and “that the Palestinian cause is the channel’s centerpiece;” there have also been claims that “the channel is a propaganda platform for Iran and Hezbollah.”
The Al Mayadeen interviewer is obviously eager to let Ahed’s father Bassem Tamimi tell their audience what an awesome “resistance” icon he has brought up. In the first clip, Ahed’s proud dad explains that after publishing the video of Ahed punching, kicking and slapping two Israeli soldiers, the family anticipated her arrest. Bassem Tamimi doesn’t mention the fact that it was Ahed’s mother who postedthe video on her Facebook page – thus apparently trying to ensure her daughter’s arrest – and he doesn’t mention the fact that the video also includes a segment where Ahed, prompted by her loving mom to give a “message to the world,” is calling for stabbings and suicide bombings.
As Bassem Tamimi explains to Al Mayadeen, even though the family anticipated Ahed’s arrest, it would have been wrong “to break (stop) a possible exemplar (of resistance) because “our people need to see a specific moment even if there is a price to pay.”
After outlining his views on futile Israeli attempts to intimidate Palestinians, Bassem Tamimi is asked by his interviewer what sentence he expects for Ahed. He calmly responds that he expects his daughter to be sentenced to a year and a half in prison, and he vows to reject any possible “agreement”: “We will not break her challenge so that she pleads guilty in front of this judge. This will be offered to us for the sake of extortion, [but] we will reject it [and] she will completely reject it.” Bassem Tamimi also claims that Ahed “said to her siblings ‘you are not allowed to have an agreement’” and supposedly, Ahed said the same to him in previous instances when he was arrested.
Emphasizing again that Ahed “rejects making an agreement,” Bassem Tamimi declares: “so we have two choices: completely rejecting the legitimacy of the [Israeli] court, or asking to put the court on trial by way of a global opinion (pressure).”
Of course, this is not really an either-or choice: the strategy Bassem Tamimi outlines obviously involves rejecting any compromise with the Israeli authorities AND mobilizing public opinion against Israel. This has been the Tamimis’ strategy for years, and according to this interview, the Tamimis intend to follow it through also now – even if it means a considerable prison sentence for their teenage daughter. The global publicity activists and sycophantic media outlets provide to the Tamimis makes it very worthwhile for them to have Ahed locked up for a year or two.
A fourth clip from the interview is summarized by the translator as follows: “Ahed’s father tells @AlMayadeenNews of how his little resistor is driving the Zionist establishment insane, discovering there [their] spying devices and leaving them baffled.”
Yet, the clip starts with Bassem Tamimi presenting a dire picture of the hardships and dangers his daughter is facing in Israeli detention – a “child” taken to “a jail cell” and facing endless interrogations; “the main court brings people to yell, threaten with rape & all these things” – but then Bassem Tamimi gloats that Ahed discovered “spying devices.”
He also confesses: “I was extremely happy when she told me ‘a police officer started yelling out of frustration, that’s when I knew I won, and he was defeated.’” Then Bassem Tamimi returns to the story about the “spying devices”, which his daughter supposedly discovered when her mother Nariman and her cousin were brought to her cell. Ahed gestured to them not to talk until she found the “spying device” and started “talking to (toying with) them [i.e. presumably the Israeli ‘spies’], mocking them.”  And Bassem Tamimi proudly concludes: “I saw that she was like a stone, all this pressure on a child hasn’t affected her one bit.”
So this is the version for Arab audiences – you can watch the strikingly different version for English-speaking western audiences here: a sad Bassem Tamimi who worries terribly about his daughter and wants her to be just a normal teenager…
Last but not least, here’s a revealing Al Mayadeen clip about how Ahed Tamimi is presented to her fans in the Arab world – and you don’t have to know Arabic, because the pictures glorifying Ahed speak for themselves, showing clearly that her Arab fans know very well that the Tamimis are not fighting Israeli settlements or the occupation of the West Bank, but Israel’s existence as a Jewish state in any borders. 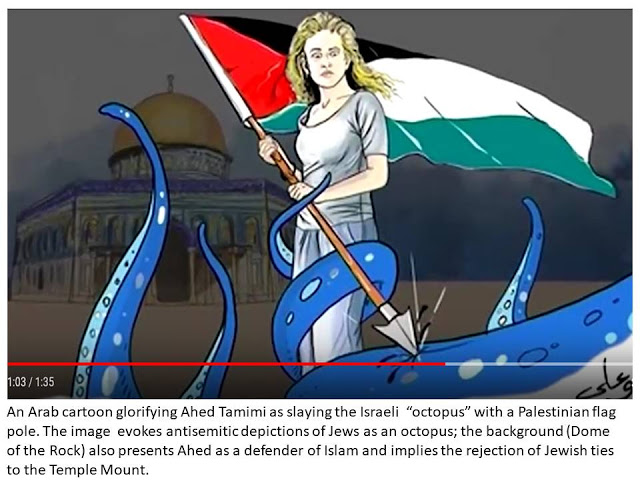 I was intrigued by one image in particular: it seemed to be cut at the bottom corners, which are also obstructed by the line of text displayed in the Al Mayadeen clip. So I took a screenshot and did a reverse image search – which was worth it: the full image shows Ahed wearing a Palestinian keffiyeh and a shirt adorned with a map that presents Israel, the West Bank and Gaza as one country; two rats wearing caps with a Star of David viciously chew at her flowing hair.
The image was apparently very popular on Facebookand Twitter; interestingly – and depressingly – it was also retweeted by Samya Ayish, who describes herself as a Palestinian “Journalist/ Producer in @CNNArabic.” Perhaps Ayish didn’t notice the antisemitic imagery of the two rats with the Star of David, but she surely didn’t have a problem reading the Arabic text of the tweetwhich praised Ahed for wearing (or representing) “the amulet of Palestine … all of Palestine.” So it seems that at least at CNN Arabic, they know what the Tamimis stand for. 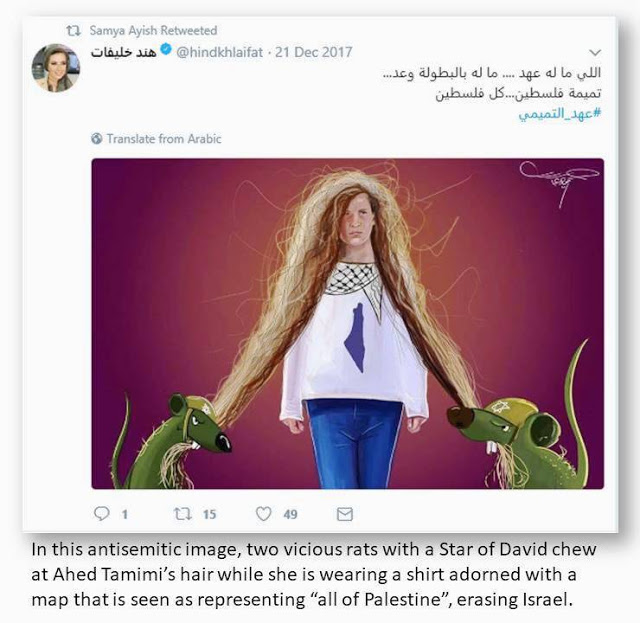