I have seen scores of articles, tweets, and protests against how Israel holds large numbers of Palestinian women prisoners and how they are supposedly mistreated.  It is a huge propaganda effort that has been happening for years; here are a few posters: 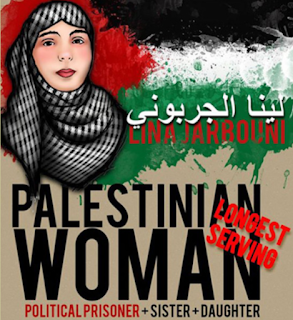 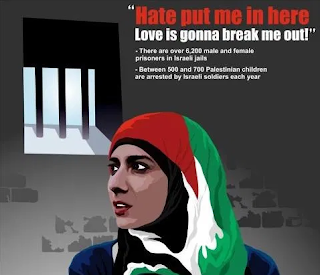 How many Palestinian women are in Israeli prisons now?

As of September – only 40. And that number has been steadily decreasing throughout the past decade – there were 61 in 2017 and 73 in 2008.  NGOs, the UN and anti-Israel activists spend thousands of hours publicizing this and claiming Israel tortures and abuses these women.

They never admit that the women themselves are usually terrorists. There have been plenty of women who have been involved with terror attacks against Jews. It seems sexist to assume that women are innocent – especially since Palestinians celebrate their female terrorists.

But the sheer amount of attention that these activists give women in Israeli prisons makes this story, just out today, most interesting:

The Syrian regime has been holding 110 Palestinian women in secret detention throughout its vast prison network, with a large number of them tortured to death, a human rights organisation has found.

The London-based organisation Action Group for Palestinians of Syria (AGPS) revealed that in addition to at least 486 Palestinian women who have been pronounced dead since the Syrian civil war began in 2011, 110 others have been secretly detained by the regime of Bashar Al-Assad and at least 34 have been tortured to death within its prisons.

The group has stated that it believes the number of Palestinian women who have been killed overall throughout the war are much higher than is officially acknowledged, as the regime has reportedly kept their names secret and left their cases undocumented, as well as the fact that many families of the victims refuse to reveal their relatives’ names out of fear of retaliation by the regime.

The organisation cited the accounts of former Palestinian female detainees of the regime who said that they were regularly subjected to intense psychological and physical torture during their detention, including heavy beatings with irons sticks, electric shocks and rampant sexual abuse.

If these NGOs cared about the welfare of Palestinian women prisoners so much, why has everyone been silent about those imprisoned, tortured and killed in Syria for the past nine years?

Even the worst reports from the biggest anti-Israel liars do not approach the reality of what is happening in Syria. Yet there is silence on Syria and lots of noise about Israel.

The double standard needs to be called out for what it is – antisemitism.