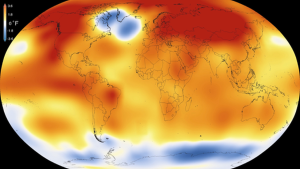 Gothenburg, October 19 – A team of scientists at the University of Gothenburg have found what they claim constitutes a firm causative connection between the ongoing Israeli-Arab conflict and the documented rise in global temperatures over the last 150 years.
Researchers studying the data related to both phenomena write in an article in the upcoming issue of Climate magazine that the steady rise in global average annual temperatures features eerie parallels with the advent of political Zionism and the efforts of the Arab population of the Holy Land to resist that movement.
Lead author Dr. Sheen Nuyakleem described in an interview the myriad links between the ongoing conflict and climate change. “It begins with the temperature changes matching the increasing intensity of the Arab-Israeli conflict, of course,” he explained. “But we also found that if you massage the data just so, each time the pre-Israel Jewish community managed to defend itself, and each time the established state successfully thwarted attempts to wipe it off the map, the pace of temperature increase rose. It’s almost as if this conflict really does lie at the core of every major problem facing civilization.”
That assumption, which governs much of Europe’s and the US’s diplomatic policies, formed the basis of the research. “Science has some axioms, and this one has proved robust in the field of diplomacy, so we figured we’d adopt it as well,” continued Dr. Nuyakleem. “Simplicity is always a goal in the scientific method, so reducing the problem of climate change to a function of Israel’s continued existence and security provides an elegant solution to two messy challenges facing the world today.”
Other scientists were quick to point out that the study did not suggest any specific remedies to be adopted in light of the new findings. “This was purely a research effort,” insisted Professor Emeritus George Galloway of Bradford University, who was not involved in the study. “Policy decisions are the province of the politicians, and I am sure they will wait for duplication and confirmation of these conclusions in further studies before rushing to fix both problems once and for all with some drastic measure aimed at ending Israel’s existence, no matter how compelling those solutions might seem.”
‘More than compelling,” he mused. “Bloody obvious, come to think of it. Do you think any further study is actually necessary? I mean, this is rock-solid stuff. [Labour Party chief Jeremy] Corbyn might want to have a look at it. He’s very science-minded, you know?”