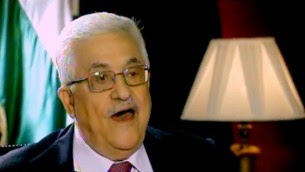 From Tablet’s Elhanan Miller in the NYT:

As he stood next to President Trump at a news conference in Washington on Feb. 15, Mr. Netanyahu cited two prerequisites for achieving peace with the Palestinians: Under any deal, Israel must maintain full security control west of the Jordan River; and Palestinians must recognize Israel as a Jewish state. But Mr. Abbas already made this recognition of Israel’s Jewish character — more than two decades ago.

In an interview with the London-based daily newspaper Al-Sharq al-Awsat in 1994, Mr. Abbas argued that the Jewish presence in Palestine was fundamentally different from any other Western colonization. Contradicting the Arab view of Jews as purely a religious group rather than also a national one, Mr. Abbas acknowledged that what motivated Jews to immigrate to Israel was a mixture of religious and national aspirations.

“Due to various causes, they have managed to establish a Jewish state in Palestine,” he said. “Most of its inhabitants were born in the state. This is a painful truth that many refuse to understand.”

Mr. Abbas’s loaded language of “national struggle” masks a surprising truth: He is the only Arab leader to publicly acknowledge Israel’s Jewish character and tacitly validate its claim to nationhood in a hostile political climate that generally likens Israeli Jews to Crusader invaders.

This sentence, “Due to various causes, they have managed to establish a Jewish state in Palestine,” is the thread that the entire article is hanging on.

And it is a very, very thin thread.


[T]hat landmark interview was printed in Ramallah as a booklet in 2011 and uploaded to the presidential website; he has never disavowed it.

Has anyone ever asked him? Ever?

And if uploading information to his website reveals Abbas’ character, then his Holocaust denial book that was uploaded there would seem to be more indicative of his true character and opinions than a single sentence in an interview.


Some might say that Mr. Abbas accepts Israel’s Jewishness only as a fait accompli, not as a matter of historic right. But for the purposes of a peace deal, what difference does that make?

Again, a very strange question. Abbas has said scores of times that he will never accept Israel as a Jewish state. All more recently than this 1994 interview. And far more explicitly.

So the question is not what difference it makes whether Abbas’ supposed acceptance of a Jewish state is made as a fait accompli or not. The question is what difference does it make that he said those words in an interview in 1994 when he has said the opposite so many times since, and so much more clearly?

Fears on the Israeli right that Palestinians would use a nonrecognition of the Jewish state to swamp Israel with Palestinian immigrants and change the demographic balance are unfounded. Not only is Israeli security built on maintaining control of its borders, but Mr. Abbas has explicitly ruled out such a strategy. In a 2012 Israeli TV interview, Mr. Abbas renounced the unlimited return of Palestinian refugees and their descendants, himself included, to Israel proper.
“It’s my right to see it, but not to live there,” he said of his native city of Safed, which he left as a 13-year-old child during the war of 1948. Asked whether he considered Safed part of Palestine, Mr. Abbas replied that for him Palestine means the territory beyond the 1967 lines, including East Jerusalem, “now and forever.”

Miller is being dishonest here. Abbas followed up that interview, a day later, by saying “my talk about Safed was my personal position, but it does not mean a waiver of the right of return. No one can waive the right of return, all international texts and resolutions of Arab and Islamic states speak of ‘a just and agreed solution on the issue of refugees in accordance with UN Resolution 194’, and the words ‘agreed’ means the agreement must be made with the Israeli side.”

And two years later he even changed his “personal position” by saying “[Israel] will not allow the return of refugees. There are six million refugees who wish to return, and by the way, I am one of them.”

Miller then asks, “Since all this is so, why does Mr. Abbas now decline to restate his recognition of Israel as a Jewish state?”

He comes up with some answers that are pure conjecture. The actual answers are in a PLO memo revealed by the Palestine Papers on this very subject.  Here is every reason given (not counting the political/talking points listed:)

Recognition of Israel as a “Jewish state” has substantial implications for many permanent status issues. The most serious implications are:

Recognizing Israel as a “Jewish state” would likely be treated by Israel and third states as Palestinian recognition of Israel’s demographic objections to the right of return and, by extension, an implicit waiver of the right of return. This would undermine the legal rights of the refugees and make it practically even more difficult to negotiate a resolution of the refugee issue.

Recognizing Israel as a “Jewish State” would also give impetus to the view which is becoming increasingly popular that land swaps should be based on demographic considerations and include populations. Namely, the view that  Palestinians living inside Israel would be swapped with Jewish settlers living in the occupied Palestinian territory.  Therefore, if Palestinians recognize Israel as a Jewish state the next demand at negotiations may be to accept inhabited land swaps and/or Israel may use this recognition to move toward denationalizing Palestinian citizens of Israel.

Now let’s pretend, despite the avalanche of evidence to the contrary that Miller ignores,  that Miller is right: Abbas really recognizes Israel as a Jewish state deep down in his heart. How does this matter? It is still undeniable that Abbas has not prepared his people for peace with Israel in any way since Oslo. On the contrary, the PA still tells people of Palestinian descent worldwide as well as “refugees” inside their own territories that they will flood Israel with millions of Arabs and that this is their legal and moral right. No student in a PA or UNRWA school is being told that there might be a symbolic “return” in a peace deal of a small percentage of so-called “refugees” and that the rest will need to be integrated into Arab countries and perhaps compensated at best – all assumptions that you will simply never see discussed in Arab media.

Instead of preparing his people for a two-state solution, Abbas has been saying that Jews are poisoning wells (reluctantly retracted) and raising wild pigs and dogs to attack Palestinians.

Abbas is not a peace partner. It is true that the alternatives are even less so, but the issue is binary – are you interested in real peace with Israel or not? Abbas’ words and actions have made it clear that he is not. Being less radical does not mean that Israel must rush to give even more concessions to him as a reward for his not explicitly calling to  throw the Jews into the sea.

Altogether, this op-ed is based on a very tenuous premise that is irrelevant at best – and far more likely false to begin with.