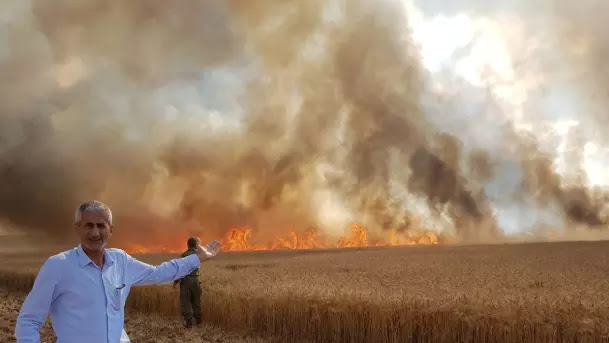 
A series of fires broke out on Monday in southern Israel, apparently as a result of flaming objects flown over the border from the Gaza Strip.

During recent clashes on the Gaza border, Palestinians have adopted a new tactic of sending blazing kites into Israel, sparking fires in nearby agricultural lands.

In a first, helium-filled balloons carrying flaming material were used to start a number of Monday’s blazes, according to Hebrew media reports.

As a result of the fires, hundreds of dunams (dozens of acres) of wheat fields were burned. There were no reports of injuries.

In addition to the flaming balloons sent over the border, a suspected booby trapped kite was reported to have landed near Kibbutz Nahal Oz.

These are not small fires.

According to the Meir Amit ITIC, over 200 incendiary kites have been sent into Israel so far, setting fire to hundreds of dunams of agricultural areas in western Negev communities and causing damage estimated in the hundreds of thousands of shekels.

In the US, deliberately setting a wildire is a felony. Wildfires destroy natural lands as well as buildings. They pollute the air and can cause respiratory problems. Over 50 people have been killed by arson wildfires in the US.

So where is the condemnation from the liberal side of the political spectrum of the specific, deliberate Palestinian policy of setting wildfires in Israel?