The Moroccan Academic and Cultural Boycott of Israel (MACBI), a boycott movement, has called for the boycott of French singer Enrico Macias’s concert in Casablanca scheduled for next month.

In a statement on January 13, the MACBI described Macias’s presence on stage at Megarama on February 14 a “shame and an insult to the Casablanca public.”

The French singer of Algerian Jewish descent who “likes to present himself as an artist for peace” is “in fact a strong defender” of the Israeli occupation of Palestine and especially the Israeli defense army, Tsahal, reads the statement.

MACBI stated that Macias is giving his blood, sweat and tears to the association Migdal, which supports the the Israel border police, Magav.

Magav, according to boycott movement, is “known for its war crimes against the civilian population.”

The MACAB’s statement, which the Moroccan-Jewish human rights activist Sion Assidon published on his Facebook page, cited some of Macias pro-Israeli statement he gave in French more than 10 years ago.

“From the beginning of my life, I have always devoted my body and soul to the State of Israel but primarily to Tsahal, but now to Magav … I do not do this neither for my advertisement, nor for my career, nor anything at all … I always gave for the State of Israel, for Tsahal, Magav, and for Migdal. Believe me, that’s the miracle of Israel.”

Macias really is a Zionist. Here he is accepting an award from Migdal.

And here is his rendition of Hatikva:
Moroccan anti-Zionists are taking an old poster of Macias fundraising for Magen David Adom and pretending that this Casablanca concert is meant to raise money for Israel. 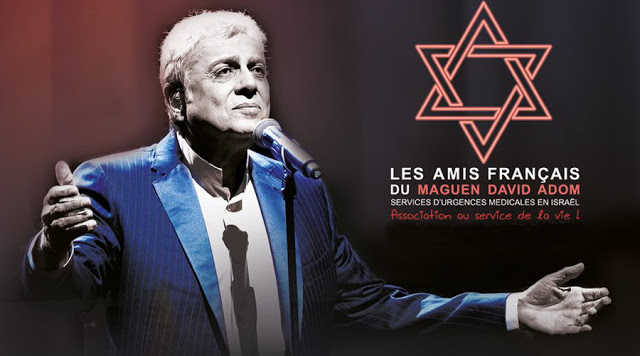 Macias has tried many times to return and perform in Algeria, which he left in 1961, but the Algerian government has consistently denied him.
Notice that this article is not saying that MACBI is trying to stop the concert, but only to get people not to attend. Which is in itself an indication that the Morocco boycott movement is more noise than anything else.
Macias has given concerts in Egypt without any issues, including at least one that was televised.