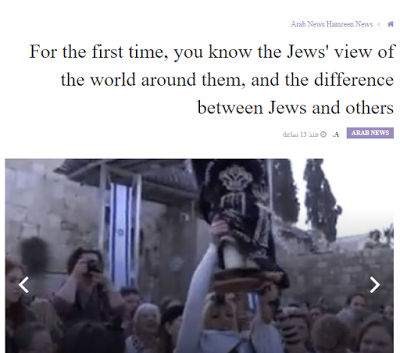 The Jews believe that their Lord has created Gentiles to serve them. ..The world is divided into two groups: the Jews and the Goyim, and the creation of non-Jews is to serve Jews, enslave them, steal from them, but this is forbidden for them to do among themselves.

The Gentiles are the donkeys whom the Lord created for the chosen people of God.When Abraham went to slaughter his son, Isaac, he was accompanied by his servants, and he said to them: Stay here with the donkey, while I and my son go to the mountain,  hence it is known that non-Jews are donkeys!

The difference between the Jewish nation and other nations is similar to the difference between man and the rest of the animals. Some rabbis say that only Jews are created in the image of God (despite what is said in Genesis 1:27 on the creation of God in His image). … In the Book of the Prophets, the Gentiles are considered beasts, and the non-Jew is no different from the wild boar….The Jewish doctor should avoid breaking the sanctity of the Sabbath in order to treat the gentiles. The Jew should not remove the rubble of a house that was destroyed on Saturday [if a Gentile is inside]. If one of the pagans  falls into a pit, the Jew must close the opening with a stone.

In the Talmud it is common to find phrases such as “Kill the righteous from the Gentiles” and “The Jew should feed the dogs and not feed the Gentiles.”

The Jews have the right to rape non-Jewish women, the wives of foreigners are permissible; because women are non-Jewish beasts.

The Jew is not permitted to be polite with the non-Jew , or to claim his love, unless he is afraid of harm.

It is not permissible to offer charity to non-Jews.

On the Day of Atonement all of the sins committed by Jews during the year are wiped out.

If the Gentiles steal something – even if its value is very trivial – they deserve to die; because they have violated the commandments that the Lord commanded them

If a foreigner and a Jew come before you in a lawsuit, and you can make the Jew a winner, then say to the foreigner: This is what our law requires…

The religious leaders must curse the heads of the religions (Muhammad, Christ, peace be upon them and the scholars of the unholy) three times every day,

Anyone who sees the tombs of the Goyim should curse them and curse them with specific words found in the Talmud.

All the goods of the land belong to the children of Israel, the land and all that is in it, and it all belongs only to the Jews, and they have full disposition in them; Jehovah gave the Jews control over the money of the rest of the nations and their blood.

The use of foreigners as practical animals has produced a profession in Palestine called “Shabbos Goy”, which is mostly Arabs, and their function is to do what is forbidden to the religious Jew to do on Saturday.

See? Now you know all about Jews!