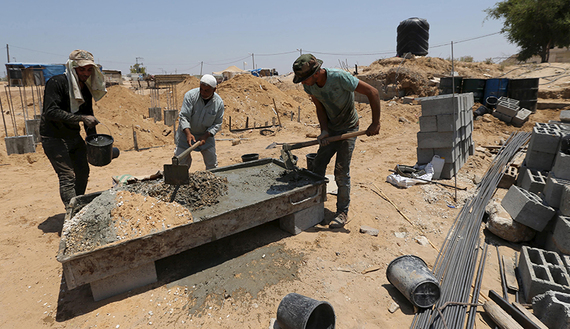 Around 2011, Egypt under Muslim Brotherhood rule briefly opened up the border to Gaza both ways, and hundreds of curious Egyptians visited the enclave expecting it to be as terrible as the news media made it sound. They were surprised to find that in many ways Gaza was better off economically than their own villages and towns.

Now as then, there is no shortage of news stories about how bad things are in Gaza. Scores of NGOs are based there, all publicizing their crucial role in helping the poor Gazans survive the “crushing siege” that Israel imposes on them.

But just across the Egyptian border, Gaza isn’t looked upon as the third world hellhouse it is portrayed as in the media. For some Egyptians, Gaza is an opportunity to escape the even worse situations at home.

Egyptian construction workers often do not earn enough to cover the basic expenses for themselves and their families, such as food, medicine and clothing.

This has forced many construction workers to work extra hours; some of them even sought to migrate or obtain a work visa abroad.

Strangely, however, some found jobs in the Gaza Strip, which is reeling under its own massive unemployment and harsh economic conditions due to the Israeli siege.

Since the beginning of the year, some employers, including contractors, in the Gaza Strip have noticed that Egyptian construction workers have been applying for jobs there.

At first this seemed quite odd. Many wondered how these Egyptian men crossed into Gaza and started searching for jobs there.

In order to be allowed to enter Gaza through the Rafah crossing, these Egyptian workers usually invoke their kinship relationship to Egyptian women who are living in Gaza and married to a Palestinian national. Egyptians, however, have to be first- or second-degree relatives of these women in Gaza to get a tourist visa to Palestine.

After getting the visa, these Egyptians are forced to wait for long periods to enter Gaza, in light of the repeated closure of the Rafah Crossing. Once in Gaza, they start their job hunt through their relatives and Egyptian connections there.

Al-Monitor met with four Egyptians working in different areas in the Gaza Strip.

Moamen Hosni, 34, is from Dakahlia governorate in northeast Egypt. …He traveled to Gaza at the beginning of March and is now working as a construction worker with a contractor related to his brother-in-law.

Hosni told Al-Monitor, “At the beginning of this year, I was evicted from an apartment I had rented in Dakahlia because I was unable to pay the monthly rent. I had been working extra hours and taking on multiple odd jobs for two years in a crumbling Egyptian economy.”

He continued, “Then one day my sister who lives in Gaza suggested I move to the Gaza Strip despite the difficult conditions there and even though it was unlikely for me to find a job. But given the currency exchange difference between the Egyptian pound and the shekel, if I did ever find a job there, I would be able to send money to my family back home and pay the monthly rent.”

Hosni works from the early morning hours until the sun sets. He said that in the month of Ramadan he works from midnight until the time of the Suhoor (the meal consumed early in the morning by Muslims before fasting).

“I have been getting a monthly salary of about 1,300 shekels ($368) since I started working in the Gaza Strip. I transfer half of this amount to my wife through money transfer offices in Gaza to pay the rent and cover other bills.”

Mutawaa Dahlouki, 42, and Ayad Bashir, 39, told Al-Monitor that they worked in Libya from September 2014 until August 2016, but they left their jobs there for fear of terrorist groups, especially after the killing of a number of Egyptian workers in Libya and the abduction of others, whose fate is yet to be known. When Dahlouki and Bashir came back home, they found their financial situation to be much worse than when they left.

Dahlouki and Bashir entered the Gaza Strip in February. Bashir’s mother is Palestinian. She lives in the Maghazi refugee camp in the central Gaza Strip with her husband, whom she had married after his father’s death in the 1990s. The two men were able to work as construction workers and as porters with a local house furniture transport company.

Dahlouki told Al-Monitor, “It is currently very difficult for an Egyptian to obtain a visa for Arab countries. Illegal migration to European countries has proved to be deadly and frightening. Moving to a European country is not as easy as it may seem. Bashir and I never thought about coming to Gaza, which has been ravaged by wars. But our search for means of a livelihood brought us here, and we found it safer than Libya.”

Dahlouki and Bashir earn a monthly salary ranging between 1,200 shekels ($340) and 1,500 shekels ($425) each for working for about 12 hours a day. They send money to their families in Minya governorate in Upper Egypt. Dahlouki has a family of six and Bashir of five.

Ahmad Mustafa, 44, traveled to Gaza to stay with his daughter, who is married to a Palestinian. Mustafa works as a home electricity maintenance technician and at night he sells cellphone accessories on a cart, on Omar al-Mukhtar Street in Gaza.

Mustafa is the father of seven children living in Hadaiq al-Qubbah neighborhood in central Cairo. He is working two jobs to be able to provide for the needs of his family, not to mention the tuition fees of three of his children.

He told Al-Monitor that an electrician in Egypt often does not make more than 50 Egyptian pounds ($2.75) a day, which is not enough to cover household expenses.

There are no UN resolutions or teary New York Times articles about the terrible situation of Egyptians in the Sinai. In fact, such stories comparing Gaza to the Sinai  would not be allowed -because it would retroactively show that the media is spent a hugely disproportionate amount of time and column-inches to a “crisis” that, while serious, is not bad compared to other economic crises worldwide that receive next to no attention.

Which is just another way of saying the adage – no Jews, no news.