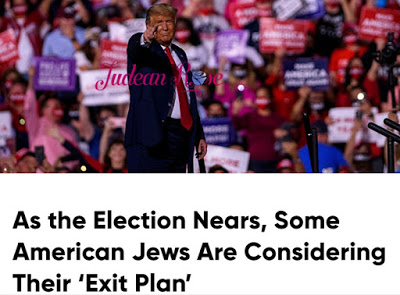 It happens every election: celebrities—and just generally spoiled people (cough cough)—swear that if their candidate doesn’t win, they’re leaving. But author Lauren Ariel Hoffman decided to write about leaving America from a Jewish perspective. Hoffman describes her own Orange Man trauma and exit plan, comparing it all to an escape from the Nazis. She then quotes a few Jewish friends on their own plans for fleeing the country. The odd thing is, not one of them considers Israel as a viable option for relocation, and in fact, Israel is not mentioned in this article at all.

Hoffman’s article was featured in Alma, which—no surprise—also includes articles on such subjects as, “Why Does My Interfaith Relationship Disqualify Me From Rabbinical School?” and “Now’s the Perfect Time to Teach Your Non-Jewish Partner All About Judaism.” So perhaps it’s not quite the right place to discover love and loyalty for the one Jewish State. You’d think, nonetheless, that in an article about fleeing the country, a Yid might consider Israel.

Never heard of Lauren Ariel Hoffman and her epigenetic intergenerational trauma? Neither had I, but her byline was linked to this handy dandy author’s blurb:

Well there you have it. Perhaps Israel, as a subject for liberal Jews, is somewhat beyond human interest.

But back to the article: Hoffman, it is clear, wants to celebrate her distress in a Jewish way. But the closest thing she can get to kosher-style anguish is by referencing the Holocaust and her family roots in the Ukraine:

It is not 1939, and yet the police are still slaughtering unarmed Black men and women in the name of “justice,” still separating refugee families at the border and putting their children in cages, still performing medical experiments on female-bodied prisoners.

My recurring nightmare of Nazis breaking into my house and capturing me is becoming more tangible, but now it’s informed and comprehensive and absolutely terrifying. And while I’m a fan of Quentin Tarantino’s Inglorious Basterds, I don’t think I’ll be knocking Nazi skulls anytime soon. I’m more prepared to find myself in a police-state wherein me and my loved one’s basic liberties will be stripped and some of our lives taken, along with members of every other oppressed group in America.

I am not going to back down from this fight, mainly because I have nowhere else to go — as a descendant of Ukrainian Jews, my ancestor’s recent homeland does not exist anymore.

Which is odd, because last I looked, the Ukraine still exists. Or so Google says:

But I don’t blame Lauren for not wanting to go back to the Ukraine. I wouldn’t want to go back there, either. It was bad enough the first time.

Still, to say she has nowhere else to go—why not go back to the place her family came from in the first place—before they were expelled and forced to wander? Why not go back to Israel, where today there is a flourishing Jewish State? But no, it’s not on Hoffman’s radar. Nor was it apparently on the radar of her Sephardic friend Rebecca Brier:

Rebecca Brier, 37, who asked to use an alias, feels differently. She and her husband are in the process of getting Portuguese citizenship for themselves and their two young children.

“If there’s one thing I’ve learned from my family, it’s that it’s okay to be the first one to go,” she said. “It’s harder with kids. We speak Spanish, but Spanish is not Portuguese.”

Brier said she is mainly torn between leaving her family behind in the Bronx or figuring out how to get them all to Portugal.

“We’ve set up our lives around our support system, our family. If we left, would we be that anchor again? At some point, flight becomes easier, because if I fly, at least I still have my family.”

On the other hand, if she would only make Aliyah to Israel, the Briers would have new family everywhere they turned. As new immigrants they would be embraced and surrounded by fellow Jews, living proud and free in their indigenousterritory. But no, Brier instead prefers to return to the land of the Inquisition, where Jews were tortured for their beliefs, forced to go underground with their observance, and slaughtered if they refused to convert. Somehow this is, to Brier, infinitely preferable to moving to the Jewish State.

“But not everyone has the luxury of leaving,” continues Hoffman:

Aviva Davis, 21, is a biracial Jew whose ancestry is more closely linked to slavery than the Holocaust. They feel it is a luxury that white Jews are able to consider leaving at all.

“I would love to have an escape plan, but it’s not a viable option for me,” they said. “Where would I go? My ancestors were carted over here as slaves — white Jews can trace citizenship back to their ancestors. It’s very frustrating for me to feel like I have nowhere to go.”

Leaving aside the odd use of the pronoun “they,” um. Where would “they” go? To ISRAEL. Where Jews of every color of the rainbow live full, satisfying, Jewish lives.

But no. These people are stuck in a time warp of pogroms, auto-da-fé, and slavery:

As Brier said, “Do we become Jews lighting candles in the closet in Spain? Or do we flee to the Ottoman Empire? I’m not sure who did it right. But the trauma is still there.”

As I write this piece, no one knows who will win the 2020 presidential election. But one thing I know for sure: Israeli Jews did it right.They left the trauma and the ghettos behind to build a beautiful, shining new world, where anything is possible, and dreams can come true.