In the aftermath of the US election, proudly progressive Israel-haters have been happy to tell everyone who’d listen that they have been right all along – alt-right, to be precise. About a week after the election, Ali Abunimah informedhis Electronic Intifada readers that Trump might be “bringing ‘white Zionism’ to the White House.” He explained what “white Zionism” is supposed to be by citing the – in my view well-deserved– criticism of Steve Bannon’s leadership role at Breitbart News, which “regularly published materials designed to stoke fears about African Americans, Latinos, Muslims and other groups, and to explicitly normalize white nationalist and white supremacist beliefs.” Abunimah then declared triumphantly: “This so-called alt-right ideology has been described by one of its key promoters as a form of ‘white Zionism.’”
Well, to Ali Abunimah it must have seemed like a golden opportunity: when half of America was in shock about Trump’s unexpected election victory and appalled by the prospectof an empowered alt-right, why not seize the moment and come up with a spin that might convince all these people that Zionism was just as bad and despicable???
But Abunimah was by no means the only one to demonize Zionism as the Jewish version of white supremacism:  at the hate site Mondoweiss, Phillip Weiss accusedrenowned Holocaust scholar Deborah E. Lipstadt of “advocating a double standard” if she was denouncing “white nationalism as a white supremacist ideology” without condemning “Jewish nationalism” in the same terms.
A more recent post at Mondoweiss gloats about the widely reported failure of Hillel rabbi Matt Rosenberg at Texas A&M University to respond to alt-right leader Richard Spencer’s claim that Jews refused to assimilate and thus remained “a coherent people with a history and a culture and a future,” and that he just wants the same for whites. As Mondoweisscontributor Jonathan Ofir concludes, “Spencer masterfully put Rosenberg in a checkmate” by exposing “how Zionism and white-supremacy in fact dovetail.”
It’s good to know that alt-leftanti-Israel activists would feel so elated to have their demonization of Zionism validated by the ‘masterful’ leader of the alt-right… The intellectual depth displayed here reminds me of Rania Khalek’s excuse when she was caught linking to a Holocaust denial site and then claimed it had just been “an error,” insisting at the same time that the book she had recommended from the site was “completely factual.” As I wrote at the time, Khalek was apparently convinced that a site devoted to minimizing Nazi crimes and defending people “not believing in the existence of gas chambers” can be trusted to feature a “completely factual” book that presents Zionist Jews as Nazi collaborators – which is obviously an idea that deserves as much ridicule and contempt as the notion that a white supremacist site would be a good place to find a “completely factual” book on blacks.
What anti-Israel activists who feel that the alt-right’s supposed affinity for Zionism validates their own “anti-Zionism” really tell us is that their view of Zionism has little to do with realities in the world’s only Jewish state.
Let’s look first at what Spencer means by “White Zionism”. This is how he put it at an alt-right gathering in 2013:
“For us ‘immigration’ is a proxy for race. In that way, immigration can be good or bad: it can be a conquest (as it seems now) . . . or a European in-gathering, something like White Zionism.  It all depends on the immigrants. And we should open our minds to the positive possibilities of mass immigration from the White world.”
More recently, Spencer told the notorious alt-right gathering in Washington D.C. something very similar as he told Hillel rabbi Matt Rosenberg at Texas A&M University:
“The Jews exist precisely because they were apart, precisely because they had, maybe you could say, a bit of paranoia about trying to stay away — please don’t quote paranoia,” Spencer said.”
Right, let’s not quote “paranoia” – it’s perhaps not the best word to describe the results of more than a thousand years of antisemitism…
But in any case, others at the gathering agreed that the Jews provided an excellent example for white nationalists. As one participant put it: “The opposition to intermarriage. The creation of their own state. The recreation of their language. This is the greatest triumph of racial idealism in history.”
So let’s start with intermarriage (and leave aside that I’m writing this as a naturalized non-Jewish Israeli citizen who “intermarried” with a Jew). While the alt-right hopes to be able to mainstream their ideas under President Trump, they presumably know that Trump’s daughter Ivanka converted to Judaism and married a Jew. So if white nationalists want to emulate Jews, they’ve surely developed some ideas about how non-Whites can convert to being white?  And another interesting question: what language do white nationalists plan to recreate?
Anyway, to clarify things a bit more, I thought white nationalists might find it useful to contemplate this image before praising Israel for any supposed “greatest triumph of racial idealism in history”… 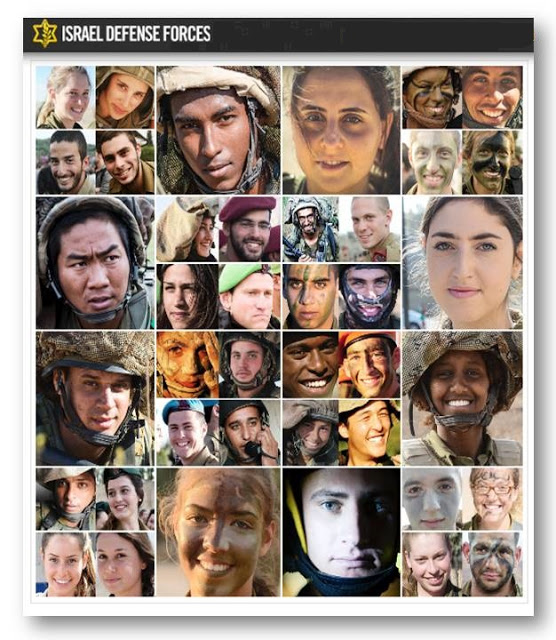 Mhm, you think this is how white nationalists would want their army to look? And, incidentally, how do you think white nationalists would feel if they knew the storyof former Israeli president Moshe Katsav, who was found guilty of sexual offenses and sentenced to a lengthy prison term by a well-respected Christian Arab judge? If white nationalists see Israel as their example, maybe we should expect that they’ll have well-respected Black Muslim judges in their state?
I could go on, but I agree with Gilead Ini’s recent remark on Twitter: taking the alt-right’s professed admiration for the world’s only Jewish state seriously, and trying to show how insincere and uninformed it is, may not make more sense than countering other libels, like “arguing that Zionism isn’t Nazism or that Jews don’t drink blood.”
But the alt-left’s eagerness to embrace the alt-right’s fantasy of Israel as a validation of campaigns aimed at eliminating the world’s only Jewish state shows how alike both fringes are: the alt-right wants a white state without Jews, the alt-left wants a world without a Jewish state – and if their respective visions were to come true, the alt-right couldn’t care less about the fate of Jews in the diaspora, while the alt-left couldn’t care less about the fate of Jews in Israel.
@WarpedMirrorPMB