Oxfam has pulled from its online shop two editions of a forged antisemitic pamphlet purporting a Jewish plot for world domination.

The virulently antisemitic tract first published in Czarist Russia at the turn of the century, inspired countless conspiracy theories and was invoked by Adolf Hitler.

The Israeli Ambassador Mark Regev took to social media on Friday after noticing editions of the Protocols of the learned elders of Zion donated to the charity appear on the global poverty charity’s online shop.

Get The Jewish News Daily Edition by email and never miss our top storiesFREE SIGN UP
A 1936 edition described as being in very good condition was marketed online for £100, while a 2002 reprint was being advertised for £12.99.

The books, both translated into English from Russian, appear to have been priced, photographed and online by volunteers.

The Board of Deputies vice president Amanda Bowman said on Friday: “It is unthinkable that a charity such as Oxfam would knowingly by offering for sale a book notorious for being an antisemitic forgery.

“Now that it has been removed, we urge Oxfam to ensure that procedures are in place to make sure this does not happen again.”

An Oxfam spokesperson said: “As soon as the books were brought to our attention we removed them from sale and they are being destroyed.

“They should not have been listed.  We provide guidance to our staff on items that are not acceptable for sale.  We apologise for the error and offence caused.  We will look at steps to take to prevent it happening again.”

How did Oxfam come to sell antisemitic books?

The Oxfam shop accepts donations from Oxfam supporters. A team of Oxfam volunteers goes through the donations, photographs them and writes up descriptions of the products and prices them.

Here is the description of one of the books: 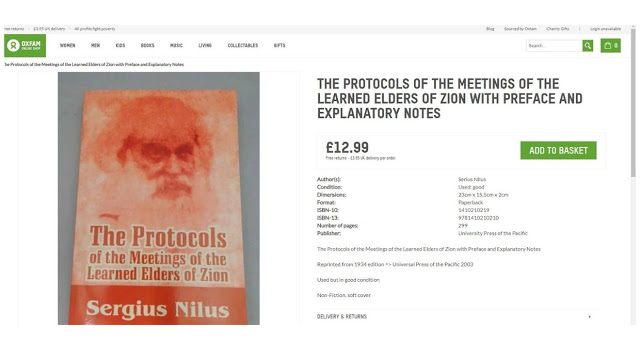 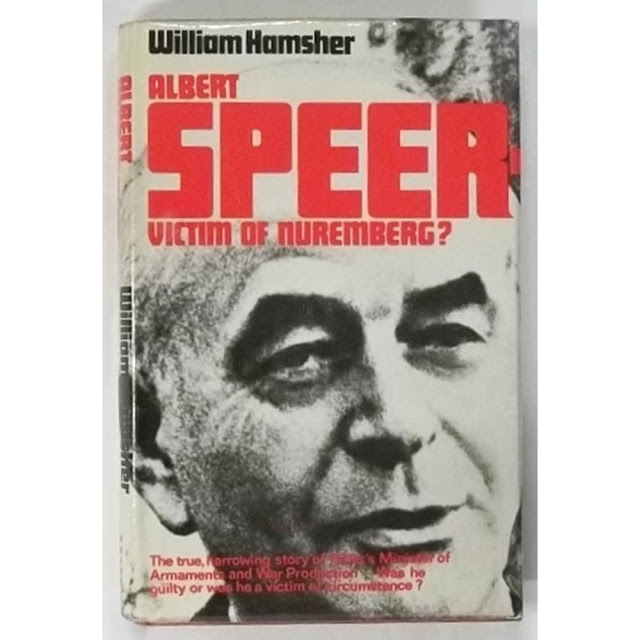 Or this notorious book by Lenni Brenner, a key part of the hoax that Zionists colluded with Nazis during the Holocaust: 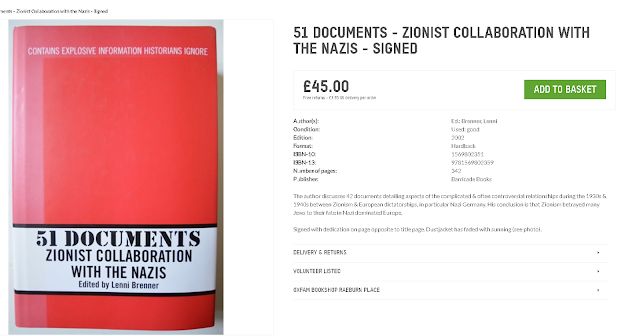 The problem is not simply that Oxfam accidentally is selling some antisemitic books. The problem is that these books are what Oxfam members are reading and recommending to others.

Meaning that many of the people who consider themselves in the vanguard of human rights cannot recognize, or worse, actively promote, antisemitism.

Too many British leftists, after decades of anti-Israel indoctrination from “human rights organizations” like Oxfam, have embraced mainstream antisemitism as normative.