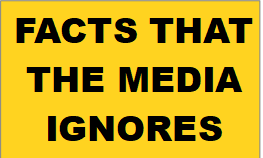 Here are six basic facts about Israelis, and one about Palestinians, that are hardly mentioned in the media or universities. That refusal to report on the truth causes a major gap in Western understanding of the conflict.

Israelis desperately want peace and to be accepted as a normal nation in the Middle East. This is an understatement. Israelis have made serious sacrifices for peace with Egypt and with the Palestinians. But their yearning for peace is not at the expense of the security of Israelis. Security of the citizens is the overarching desire of every conceivable Israeli government, and is more important than any peace plan that does not fully guarantee security.

No one in Israel wants to rule over Palestinians. As much as is possible, Israel has tried to avoid that – by withdrawing from Gaza and allowing Palestinian autonomy in Area A and to some extent Area B. But the alternative of fully withdrawing from the territories is generally considered to be worse. Gaza shows the worst case scenario of unilateral withdrawal.

Almost no one in Israel wants to go to the 1967 lines. It is obvious that the human cost of doing that is unacceptable. Pretty much everyone agrees that some territories will always remain under Israeli rule, perhaps with land swaps. Framing the question as whether Israelis are “against the occupation” or “for the occupation” is deceptive, since the vast majority are against fully controlling 100% of the territories and a vast  majority are also against dismantling the homes of half a million people. Spinning either position as “pro” or “anti”-occupation is simply not to report the truth.

Israelis deserve human rights as much as Palestinians do. Israel wants to provide as many human rights for Palestinians as possible without compromising on the security of Israeli citizens, who also deserve human rights. The line between the two is in flux. When threats are reduced, restrictions are (or should be) reduced as well. All of Israel’s security measures that upset people (like the separation barrier) have been put in place to save lives. “Human rights” advocates who ignore Israeli lives are not interested in human rights.

Racism exists in Israel, but it is no worse than the racism in other Western countries. Arguably Israel is far more tolerant than most Western nations towards Muslims. The Palestinian issue is not a race issue at all from Israel’s perspective – it is a security issue.

Israel can do better. Israelis admit that. In general, it strives to do better, even in the face of vicious world opinion. Even when no one will notice. Western armies study Israeli methods of warfare while minimizing casualties of civilians/human shields because they are so good at it, but no one is perfect.  No one in Israel wants innocent Arabs to die.

Palestinians have had 25 years since Oslo to teach their children peace, but they have done the exact opposite. Violence has been reduced not for any moral reason but because terror is seen as counterproductive at this time. Palestinians still teach their people that violence is a legitimate, moral option, and that terrorists are heroes.

People who ignore these facts are not interested in peace. People who say that Israel must make all the concessions are not serious about peace.

People who ascribe the lack of peace to a lack of will on the part of Israelis for peace are pretty much accusing Jews of being evil.  Calling Israelis “Nazis,” calling Zionism “racism” or accusing Israel of “apartheid” are not serious arguments, and people who insist on those designations are only interested in demonizing the Jewish state. They are either antisemites or hopelessly deluded.

But if the West would report on these basic facts, then the number of people who are susceptible to the antisemitic arguments would fall dramatically.

Everything I am writing here is obvious to all Israelis, Zionists and to anyone who has spent any time in or seriously researching Israel. But practically everything I’m writing here is generally not mentioned in Western media reports on Israel or in textbooks.

That gap between the truth and what is being reported is a major impediment to peace.

The real story is not hard to uncover. But the fact that it is so hard for an average Westerner to understand these seven points based only on the materials easily available is a scandal.