The head of the Islamic Movement inside the occupied Palestinian territory, Sheikh Raed Salah, was subjected to verbal and physical abuse inside the Israeli prison.

A member of the defense of the President of the Islamic Movement inside the 1948 Palestine, lawyer Khaled Zbarqa, told Al Rai about the fear and anxiety for the life of Sheikh Salah and his safety as he was attacked and threatened by Jewish prisoners inside the prison, and this is indicative of the fact that the inflammatory rhetoric that the Sheikh has been exposed to by Netanyahu personally and his ministers in his government, created a hostile atmosphere  to the sheikh  through threats and abuse. He confirmed that the attack included verbal and physical beatings by Jewish prisoners inside the prison.

The guy whose entire life is built around inciting Arabs to kill Jews is complaining about Israelis inciting to kill him.

Of course, Raed Salah has no evidence of incitement by Netanyahu, and the amount of evidence of his incitement could fill volumes.  And here is a nice cartoon he posted on Facebook just last month: 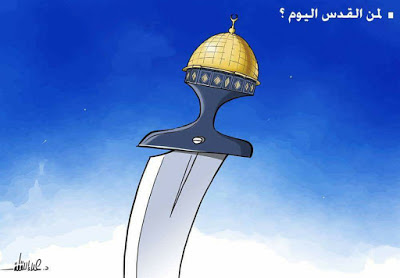