Anti-Israel activists in Europe have renewed their efforts to exclude ‎Israel from the European Union’s next research and development ‎initiative, Israeli officials said. ‎

Israel is part of the current R&D initiative, Horizon 2020.

The next ‎program, dubbed FP9, ‎will run from 2021 to 2027 and lays the foundation for Horizon Europe, an ambitious €100 ‎billion ($117 billion) research and innovation program meant to ‎succeed Horizon 2020, the eighth framework program.‎

Israel, a world-renowned innovation hub, has been the top ‎dependent on these funds among non-EU member states.

But ‎earlier this month, hundreds of European Parliament members received a letter signed by ‎‎154 groups, organizations and unions from 16 ‎countries, urging the EU “to uphold its legal responsibilities and ‎exclude Israeli military companies from EU framework programs.”

The letter is titled “No EU Money to the Israeli Arms Industry.”

“The EU has been funding security-industrial research ‎for many years,” it claims.

“European taxpayers’ money is being ‎channeled to military companies, among them many Israeli ‎corporations, under the disguise of research and a promise that the ‎technologies and techniques developed will be used solely for ‎civilian purposes.‎

‎”One of the ways in which arms and military companies have ‎gained access to EU funding is through the current EU Program for ‎Research and Innovation, Horizon 2020. This includes many Israeli ‎military companies. Although the EU claims that research funds ‎have gone only to projects with civilian applications, many of the ‎projects approved are of dual-use nature serving military interests ‎as well. Many others serve policies that curb or violate refugees’ ‎rights and militarize our societies.‎

“The EU’s cooperation with Israeli military companies is proof that ‎dual-use projects are inherently serving military purposes as well. ‎Isaac Ben-Israel, chairman of the Israel Space Agency, put it ‎bluntly, saying, ‘Because we are a small country, if you build a ‎small-satellite production line, say at IAI, it will be used for military ‎and for commercial purposes.’

The weird thing is that the agreement between Israel and the EU for this program, which has been in place since 2000, does not exclude research that can be used for military purposes.

Nothing in the Agreement shall prevent a Party from taking any measures:….

(b) which relate to the production of, or trade in, arms, munitions or war materials or to research, development or production indispensable for defence purposes, provided that such measures do not impair the conditions of competition in respect of products not intended for specifically military purposes;

(c) which it considers essential to its own security in the event of serious internal disturbances affecting the maintenance of law and order, in time of war or serious international tension constituting threat of war or in order to carry out obligations it has accepted for the purpose of maintaining peace and international security.

As usual, the BDSers are lying. 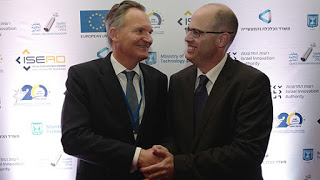 And the EU seems quite happy with Israel’s participation in the program.  The 20th anniversary of the program was celebrated in January.


The Jerusalem Theatre was the venue for an extraordinary conference on January 10 when hundreds of Israeli researchers and officials gathered to celebrate the 20th anniversary of Israel’s association to the EU Framework Programme. Leading the EU’s delegation to the event was Robert-Jan Smits, Director-General of the European Commission`s Directorate-General for Research and Innovation. The event was organized jointly by the EU Delegation to the State of Israel and ISERD – The Europe – Israel R&D Directorate and was financially supported by DG Research and Innovation.

Israel was the first non-European country to be associated to the EU Framework Programme back in 1996. Its participation in the EU Framework Programme has been a success story and represents an added value both for Israel and for the EU. Over the past 20 years of partnership, overall Israeli investment amounted to €1.375 billion, while the return to Israeli entities in the form of grants reached €1.7 billion. Over 3,000 projects submitted by Israeli entities were approved involving 4,435 participants. Of these, 2,450 were academic researchers, 1,270 were industrial researchers, and 715 researchers from other sectors.

Israel’s excellence in the programme has been especially notable in the European Research Council grants for outstanding researchers doing ground-breaking research, grants in the ICT, water, health sectors and many others.

In his remarks, Robert-Jan Smits said that, “The EU and Israel research and innovation cooperation represents 20 years of success, partnership and friendship. What has been achieved during these years is impressive. The Israeli and EU scientists have built sustainable partnerships and worked together on many challenges ranging from child tumours, smart irrigation to robotics and science education, advancing in this way the frontiers of knowledge and contributing to the well-being of our citizens”.

The list of the 154 organizations that signed this letter include some groups that sound like they have one or two members, and a lot of communist groups, including: