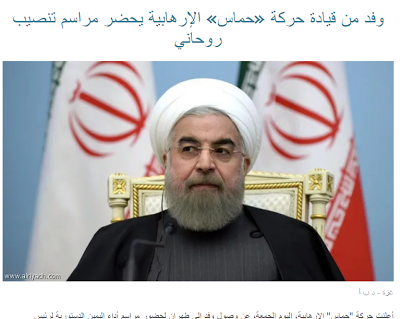 The “Hamas” terrorist group announced on Friday the arrival of a delegation to Tehran to attend the a constitutional ceremony for the President-elect of the Republic of Iran Hassan Rowhani.

The terrorist group said in a press statement that the visit of its delegation, headed by its political bureau member Izzat al-Rishq and includes three of its leaders, including Saleh Aruri, are coming in response to an invitation from Iran.

Hamas is a terrorist group as classified by the United States and the European Union.

That is a lot of emphasis that Hamas is a terror group!

Hamas complained about this, as did its fans on social media and even non-Hamas media outlets. Afterwards, the newspaper silently removed the story.