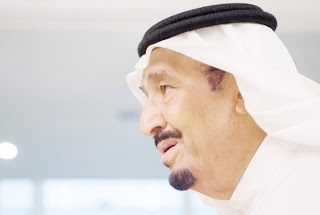 While Mahmoud Abbas’ media is praising him for his “victory” over Israel, others are claiming that they are the ones who were instrumental in Israel’s decision to take down the metal detectors outside the Temple Mount.

One of them is King Salman of Saudi Arabia, who took credit for the decision in a press release:

PROTESTS and pressure from world leaders, led by Custodian of the Two Holy Mosques King Salman, forced Israel to remove all security measures at Al-Aqsa Mosque. The move felicitates the return of Palestinian worshipers to the mosque, in what may be a turning point in the two-week standoff.

During the calls, King Salman asserted the rights of Palestinian Muslims to access Al-Aqsa Mosque. According to a Royal Court statement issued on Thursday, King Salman’s communications with world leaders succeeded in resolving the Al-Aqsa confrontations.

The Saudi government contacted the US administration and urged it to facilitate the opening of Al-Aqsa Mosque to Muslims, and for allowing them the right to worship after restrictions on access to the mosque were imposed by Israeli forces, the Royal Court statement said.

The statement added that King Salman’s efforts have been successful in a way that contributed to restoring stability and provided reassurance to the worshipers. It helped safeguard their dignity and security.

There are two messages here. One is the normal attempt by any national leader to make themselves look more important than they are by taking far more credit for world events than they deserve.

But the other is to downplay the political importance of Mahmoud Abbas.

A real ally would be sensitive to how a statement like this would play in the territories. King Salman doesn’t really care.