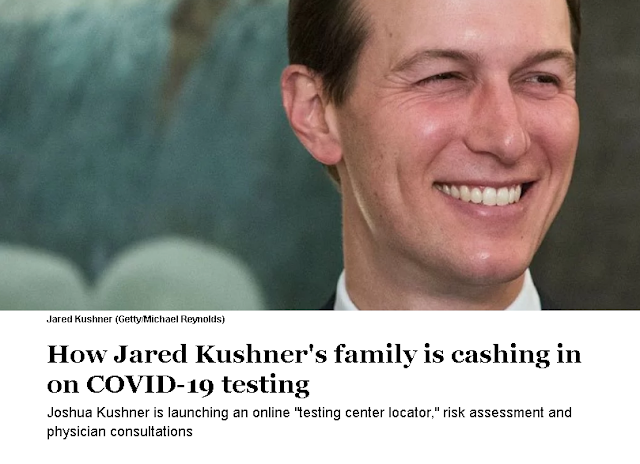 The Kushner family is trying to cash in on the pandemic that could kill millions of us.

Oscar Health, the health insurance company co-founded by Jared Kushner’s younger brother,announced Friday it has launched a testing center locator for COVID-19. It shows where more than 100 centers are in the United States. The company is also offering a risk assessment survey and means to talk to a doctor online.

How exactly is a health insurance company offering a free on-line screening test to everyone, and telling them afterwards where the nearest testing center is, “cashing in”?

Aren’t those admirable? Isn’t that what one would hope every insurance company – or online magazine like Salon – would do?

The rest of the article doesn’t explain why this is a bad thing, or how the Kushner family is “cashing in on the pandemic that could kill millions of us.” It criticizes Trump’s and Jared Kushner’s response to the pandemic, mentions that Mar-a-Lago is a coronavirus “hot zone,” and that Oscar Health co-founded by Joshua Kushner has been losing money.

The name “Kushner” is literally the only thing negative about this story.

In fact, Joshua Kushner is a long-time liberal and not a Trump fan. Part of the reason Oscar Health is losing money is because Oscar is one of the companies working under “Obamacare” and there is uncertainty as to what Trump will do with health care.

All this has nothing to do with Jared.

The online survey from Oscar Health is not earth shaking but can certainly be useful. Just the ability to guide people to the right decision about whether to seek help without taking the valuable time of doctors is admirable. It does use the latest information to estimate one’s chances for getting the coronavirus. Its list of testing centers is very sparse, only showing centers in about five states – but I haven’t seen any better list yet, and Oscar Health promises to update the list continuously.

So what is Salon’s problem?

This is an article about how a Jewish family is supposedly trying to get rich over a world health catastrophe. It sure sounds like an antisemitic conspiracy theory. There have been articles like this about the Rothschilds for over a hundred years. The methodology Salon uses to tar the Kushners is very familiar to those who have read other antisemitic and anti-Israel pieces, with disparate information being put together to prompt the reader to come to a conclusion that some evil conspiracy is happening when the facts show nothing of the sort.

This isn’t to say that Trump cannot be criticized – there is plenty to criticize – but the aura of hate around everything Trump is way beyond sober criticism and far into the irrational.

This piece by Salon is, by any measure, trash. It is pure insinuation and incitement with no facts to support it. The only question that remains is whether the article is a result of deep-seated baseless hatred of Jews or of Trump. And if it is hate for Trump, the writer should explain exactly how the actions of a health insurance company whose co-founder’s brother is Trump’s son-in-law is remotely related to anything Trump does.