The Mayor of Rome, Virginia Raggi,  reversed the city’s decision to name one of the city’s parks after arch-terrorist Yasir Arafat.

The original plan was for a street to also be named after the late chief rabbi of Rome, Rabbi Elio Toaff, for “balance.” Toaff died in 2015.

The Jewish community of Rome protested bitterly against the decision.  The chair of the Jewish Community of Rome, Ruth Dureghello, wrote an open letter to the mayor, saying “We remember Arafat,  for those who obviously do not know the story, as the moral force behind the anti-Semitic attack on the Synagogue of October 9, 1982, in which Stefano Gaj Taché was killed, a Jewish, Roman and Italian child. Choosing to dedicate to Arafat a park is unacceptable…The city of Rome must choose: to remember the terrorists or their victims. Both things are not possible.”

The letter also called Arafat the “forerunner, if not the creator, of modern terrorism.” 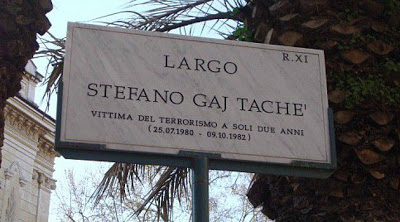 
The attack took place at the Great Synagogue of Rome in the historic district of Rome on Saturday morning, at 11:55 a.m., at the conclusion of Sabbath services. As the families of the local Jewish community began leaving the synagogue with their children from the back entrance to the synagogue, five elegantly dressed  armed Palestinian attackers walked calmly  up to the back entrance of the synagogue and threw at least three hand grenades  at the crowd, and afterwards sprayed the crowd with sub-machine gun fire. Eyewitnesses at the scene stated that the hand grenades bounced off the steps and exploded in the street
A 2-year-old toddler, Stefano Gaj Taché, was killed in the attack after being hit by shrapnel. In addition, 37 civilians were injured, among them Stefano’s brother, 4-year-old Gadiel Taché, who was shot in the head and chest.

Reaction in the Italian press to the initial decision was mixed. There were a number of articles that agreed with the Jewish community that it was ill-advised. An op-ed in Il Fatto Quotidiano ridiculed the “balance” of honoring the terrorist and the Chief Rabbi, saying that the political correctness that prompted the decision was akin to equating the Torah with a Kalashnikov.

Strade Online remembers not only the Great synagogue attack but also the 1973 attack by Palestinians at Fiumicino International Airport that killed dozens and the 1985 attack at the same airport that killed 16.

But Comune-Info.net instead complained about how Rome gives “veto power” to the Jews, and it said that the Jewish community letter calling Arafat the architect of modern terrorism is an example of brilliant fake history.  It says “We do not want to believe that it is for low reasons of interest dictated by the economic and media power of Zionism that we accept the pro-Israel diktat, no, we just think that the terror of being unjustifiably labeled anti-Semitic has now assumed the power of an invisible but very sharp sword ready to decapitate anyone who dares to criticize Israel.”

Because murdering hundreds of people is valid criticism of Israel.