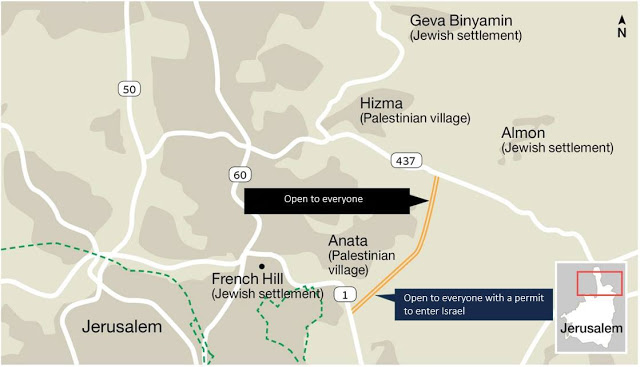 From Tomer Ilan:
Road 4370 was opened last week east of Jerusalem.
Many news outlets have called it an “apartheid road” including Haaretz.
Times of Israel and Ynetnews have also misreported it, as did many international news outlets.
JNS has debunked the apartheid accusation but incorrectly states that the road “separates vehicles of Israeli citizens and non-citizens”.
CNN however gives a more accurate description:
“The road, which runs north-south, is actually two parallel roads separated by an 8-meter concrete wall topped with metal fencing. The western half is designed for Palestinians, though it can be used by anyone, and it bypasses Jerusalem; the eastern half is for Israelis, and anyone else with a legal permit to enter Jerusalem.”
In other words, the western road can be used by anyone (Israelis and Palestinians) who doesn’t want to go into Israel and the eastern road by anyone (Israelis and Palestinians) who wants to go into Israel and has a permit to do so.
That’s NOT apartheid.