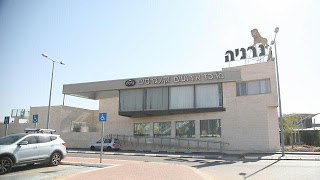 
The Shin Bet arrested four individuals last month suspected of planning to carry out a large scale terror attack in an events hall in Be’er Sheva and kidnapping an IDF soldier, it was cleared for publication Thursday.

According to the indictment issued against the four, they planned to throw grenades into a crowd of dancers celebrating at the Narnia events hall and to use weapons they would hide in trash cans ahead of the attack before fleeing the scene. They also considered detonating pipe bombs concealed under the dining tables.

Moreover, they began accumulating funds to perpetrate a separate attack involving the abduction of an IDF soldier from the city’s central bus station who they intended to kill and use his remains to solicit concessions from Israel.

During the investigation of the four conspirators, one of whom is a resident of the bedouin town of Tel as-Sabi in the Negev and the other three illegal aliens from Gaza, interrogators discovered that the planned attack was the brainchild of the Gaza-based Islamic Jihad organization.

The suspects, two of whom worked in the events hall which they intended to strike, carefully plotted their attack as they collected information about their target.

The ringleader of the suspects, all of whom were arrested on September 21 by the the Shin Bet in cooperation with the Negev Police Central Unit, was identified as Mahmoud Yusuf Hasin Abu-Taha from Khan Yunis in southern Gaza who had entered Israel via the Erez Crossing for commercial purposes.

He was recruited into the cell by Wael Abu-Taha, a senior official in the Islamic Jihad movement who lives in Gaza, when the latter asked him to establish a military infrastructure and coordinate a terror attack.

In May, Mahmoud and Wael presided over plans for the attack’s execution in the hall and, to that end, checked a number of entrances to the complex. It was decided that Shafik would enable the attackers to enter, including Mahmoud who was also scheduled to work on the day marked for the bloodletting.

Israel allows thousands of Gazans to enter Israel every month as merchants.  This story shows that not only do some of them stay in Israel, but they even get jobs!

Doesn’t Israel check that everyone who leaves Gaza returns? Why didn’t the events hall do a basic background check of the terrorist workers and check their names against a list of known suspects?

This story is much scarier than the headline. It points to a basic failure in Israel defending itself.

If Israel responds by tightening up on who can leave Gaza for commercial purposes, then this attempted terror attack will hurt ordinary Gazans. Yet no Arab can ever be found to publicly denounce the selfish stupidity of Islamic Jihad in trying to subvert a humanitarian gesture into a terror attack. On the contrary – most Palestinian Arabs consistently say they support specific terror attacks after the fact.