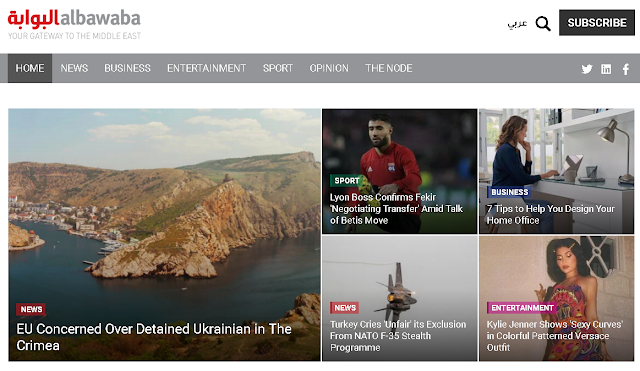 Albawaba is a Jordanian based Arab news site that, in English, looks professional and youth oriented.

A media bias/fact check site found it to be unbiased.

In Arabic, though, things are a little different.

This article doesn’t say anything new but it touches on all the standard Arab antisemitic thinking:

President Donald Trump considered Jerusalem as the capital of Israel based on a lie that Jerusalem was the capital of the Jewish people. We know that Judaism is only a religion, but the Jewish religion is not national, which makes us deny the existence of a Jewish people. … Is there any connection between the Jews of Israel and the Jews of the people of Moses peace be upon him? The Jews that are Khazars have nothing to do with the Jews of the time of Moses, peace be upon him, neither in form, in language. As well as the Jews of Yemen .. Falasha Jews .. They are residents of Abyssinia and did not know Palestine and did not visit them and have no relationship with the Jews in terms of form, race or language. There were also Jews in the Arabian Peninsula, the Jews of Khyber, Bani al-Nathir and Bani Qinqaa. They are Arabs who have nothing to do with Israel.

For Jews, there is no religion except Judaism. The Islamic and Christian holy sites do not matter to Israel, nor do they consider them to have any sanctity, in addition to their being unwelcome.

The Jews are known for lying and charging interest and fornication since ancient times. They are a people of terrorists, as described by the Torah, the Bible among the Jews, who robbed the Egyptians of gold and fled under the cover of darkness when they came out of Egypt with deceit. They invented an imaginary pretext and fled from Egypt under the cover of darkness. In the Sinai instead of the worship of God one of them crafted a calf of gold to him until the Jews worshiped it as stated in the Torah…

The Jews are a false and fraudulent people. We are puzzled by this crooked people. Their prophet orders them to steal and their Lord helps them. Their holy book tells us that theft and fraud are among the great ideals and values ​​that they boast to the peoples of the world.

As a result of these qualities in the Jews, they were expelled from the European countries several times…

If the Jews read Jewish and Islamic history they’d see how the Arabs embraced them and treated them excellently, but they are like a snake after you take care of it, the fangs are planted with the deadly poison to those who hugged and warmed them.

The existence of such hate in a mainstream Arab publication is disgusting, but that isn’t the worst part. The worst part is that there is absolutely zero criticism from any of the hundreds of millions of Arabs who are exposed to this type of article, even though they all swear they are not antisemitic at all.

In other words, this bile is not treated in the Arab world as opinion, but as fact.