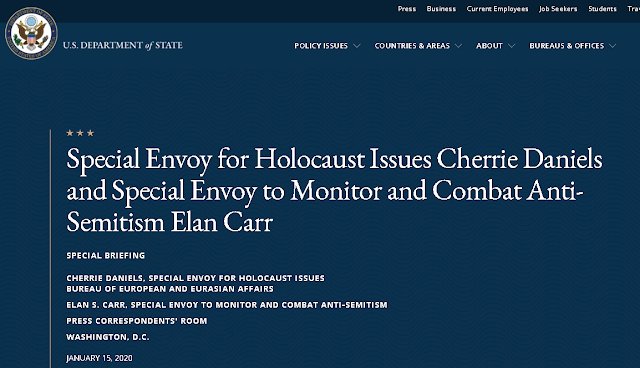 Carr addressed the issue of when criticism of Israel turns into antisemitism:

There are three primary sources for the rise in anti-Semitism: the far-right ethnic supremacists, the radical-left anti-Zionists, and the militant Islamists.  It is a fundamental principle of our work that we do not rank these sources in importance nor do we minimize any of them.  All three are dangerous and all must be combated.  If one-third or two-thirds of a tumor is left untreated, the patient does not fare well.  So all must be combated.

When Jewish individuals are demonized, delegitimized, or when Israel is held to a standard not applied to any other country in the world, that is anti-Semitic.  Secretary of State Pompeo has clearly stated, and I quote: “This bigotry is taking on an insidious new form in the guise of ‘anti-Zionism.’ … Now, don’t get me wrong, criticizing Israel’s policies is an acceptable thing to do in a democracy.  It’s what we do.  But criticizing the very right to exist of Israel is not acceptable.  Anti-Zionism denies the very legitimacy of the Israeli state and of the Jewish people. … Let me go on [the] record: Anti-Zionism is anti-Semitism,” end quote.

Later, during Q&A, a reporter named Said who was clearly insulted by this tried to ask a question:

Q: My question is to Mr. Carr.  What would constitute a legitimate criticism of Israel in your opinion, or in your definition?

MR CARR:  Any criticism of Israeli policy is legitimate as long as Israel is not being subjected to a double standard.  Now, one of the defined examples of anti-Semitism is subjecting Israel to a double standard.  So even criticism of Israeli policy could be anti-Semitic if it’s a criticism that is – if it embraces a standard not applied to any other country in the world.  However, other than that case, any criticism of a policy of the state of Israel is legitimate.  However, criticizing Israel’s right to exist, targeting Israel as a Jewish collective, denying the Jewish people the right of self-determination in its ancient homeland, these are defined in the IHRA working definition as examples of contemporary anti-Semitism.

Said managed to get his followup later, but he wasn’t pleased that he couldn’t start an anti-Israel rant this time either:

MS ORTAGUS:  Said, did you have another follow-up?

QUESTION:  Yeah, I just wanted to clarify.  You said that Israel is being held to a double standard.  Can you give us some examples?  I assume you – that you are referring to debate or activities that probably are taking place in international bodies like the UN and other places.  Could you clarify and cite some examples?

MR CARR:  Exactly.  Well, exactly.  I mean, the UN Human Rights Council’s obsessive focus on condemning Israel and according Israel a specific agenda item for discussion and condemnation is unacceptable, and that’s one of the reasons why the United States walked out.  And we see under the leadership of President Trump and Secretary Pompeo a determination not to collude in this kind of singling out of the one Jewish state in the world and treating Israel like no other country should be treated.
Now, again, criticism of Israeli policy, sure, have at it.  You can criticize American policy, Israel’s policy, and every country’s policy.  But be fair, don’t apply double standards, and don’t question the very right of the Jewish state to exist.

QUESTION:  But Israel, you must agree, occupied the Palestinians for over 52 years.

To Said, obviously Israel should be treated with double standards, because, um, occupation!

Ironically, HRW’s Ken Roth tweeted Carr’s definition of antisemitism including double-standards towards Israel without any irony that this is exactly how HRW treats Israel.

I responded with several examples.

Yes, everyone agrees with that.

And @HRW has been guilty of a double standard towards Israel for a LONG time. Which makes it antisemitic.