I just stumbled upon this article by Aaron David Miller, one of those experts we hear a lot about. 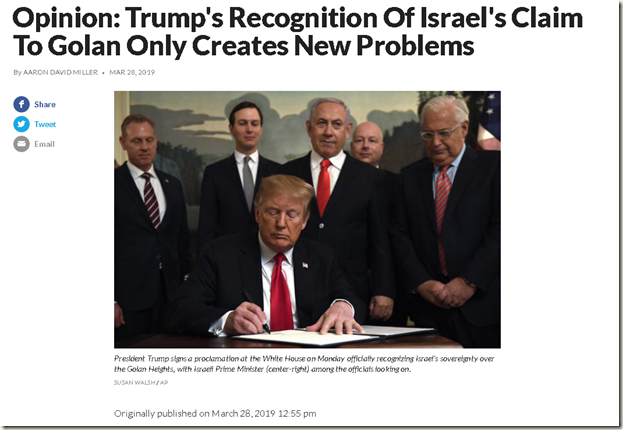 He confidently predicted that it would make Saudi Arabia unlikely to support the Trump peace plan. Yet Saudi Arabia attended the Bahrain economic summit which was the first part of Trump’s plan – only three months later.

Miller says that annexation of the Golan makes peace with Syria less likely. I’m not sure what is less likely than impossible, but sure.

And finally Miller says that the Golan recognition would make it less likely that the Deal of the Century would be accepted. I think we can confidently say that this was not at all a factor.

The most interesting thing about the Golan is that is was a real annexation that Israel did in 1981. The world didn’t end, no one is saying that the Golan Arabs are living in “apartheid,” and if anything the US recognition could make them comfortable enough to not be nervous that they would be bargained back to Syria where they could be imprisoned or executed as Israeli spies.

Aaron David Miller might be very knowledgeable, but knowledge does not translate to wisdom – or the ability to predict what would happen in the future.

Just as the entire world is predicting the terrible things that would happen if Israel extends its laws to parts of Judea and Samaria. All they have to do it look at the Golan, because that is the best analogy to what would happen in the territories.