With all of the talk about the Temple Mount, it is sometimes easy to forget that every single Jewish holy site is also claimed by Muslims today as being exclusively Islamic.

Think about that. Muslims do not want to allow the Jews, who  they claim to respect, to have a single holy site of their own. They have attempted to steal every one, from major Jewish shrines to relatively minor ones. 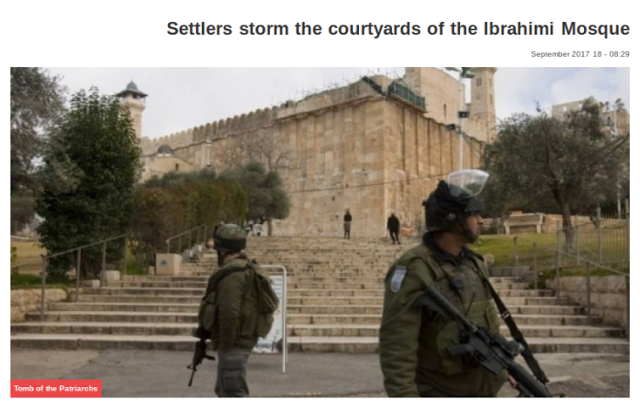 The story says “According to Ma’ariv, the settlers performed a Talmudic ritual inside the Ibrahimi Mosque and left the area this morning.”

The “Talmudic ritual,” of course, is praying. But that doesn’t sound quite as sinister, does it?

Muslims always denied Jews from visiting this site when it was under Muslim rule. Even though they know quite well that Isaac and Jacob and their wives, interred there, have nothing to do with Islamic history besides the Koran claiming them as “prophets.”

This wholesale theft of an entire history seems a bit more serious than Israelis saying falafel is their national dish. But there are more articles about how Israel’s supposed “cultural appropriation” than Muslim theft and attempted theft.