TOP NEWS
http://elderofziyon.blogspot.com/2018/10/rafael-levengrond-stepping-into-gap-for.html
Rafael Levengrond: stepping into the gap, for Kim
Kim Levengrond Yehezkel’s Facebook page is full of her wedding pictures and pictures of her baby, Kai. Her posts are obvious displays of her love towards her husband and their son.
Now the posts have comments of crying icons, people describing how beautiful, wonderful and kind she was.
And Facebook added that one little word to the profile title: Remembering.
What a small word to explain something so horrific.
How do you explain to a baby that the mother who dropped him off in nursery school will never come back? When will he learn that a terrorist tied her up before he executed her? That a man who worked with her, murdered her simply because she was a Jew?
Even if they don’t grow up as friends, little Kai will always be connected to the three children of Ziv Hajbi. Their father was murdered by the same terrorist, alongside Kim. 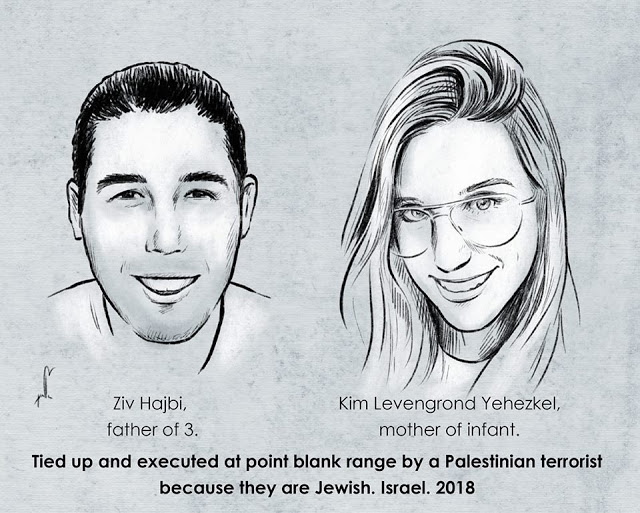 Thanks to TICP – The Israeli Cartoon Project and Elhanan Ben Uri
for this touching image of Kim and Ziv, may their memories be a blessing.
Ziv and Kim worked in a factory that granted equal opportunity employment to Arabs from the Palestinian Authority. The wages paid are significantly larger than what they could earn working in a business in the PA and they receive full social benefits according to Israeli law.
The excellent employment opportunity was not enough to stave off hate for the terrorist. He preferred to murder Jews than to continue working there. The Palestinian Authority will pay him handsomely for the blood of Kim and Ziv.
A lot of the media attention has been on Kim because she was young, beautiful and the mother of a baby. The memory that I will retain from this horrific attack will be that of Kim’s father, Rafi, speaking at the site of her grave:
https://www.facebook.com/reshet.tv/videos/545488489207197/
“I’m sorry I wasn’t there, by your side. Because you know that I was always with you and by your side and no one could ever hurt you when I am by your side. There could never be a situation that someone could lift a finger against you when you are near me.”
“To my sorrow, I didn’t manage to get there in time although I did get there and I saw what was done to you. I promise you that I will take care of them [her husband Guy and their son Kai] the way I took care of you all, all the time. I will continue on the same path. You can rest in peace. I am taking care [of it for] you.”
Heartbroken, but with a strength that is unending, this man could have let himself shatter to pieces, with his broken heart. Instead he decided to step up and fill the gap left behind by his daughter’s murder.
Will he let his tears fall later? Maybe. Now, he is on duty and it’s a job for life – until the end of his life and for Kim’s life.
Something tells me that he will forever be angry at himself that he was not there to protect his daughter, his princess. That he would have gladly died so that she could live.
Rafael Levengrond embodies that strength of Israel. Many do not recognize our pain, seeing only our strength, not understanding that it a strength full of pain and grief driven by the knowledge that giving up is a privilege we do not have.
When Ari Fuld was murdered many of us declared that now we must be Ari, step up, fill the gap, pick up and carry forward the burden that he carried. That is exactly what Rafael is doing for Kim, with a broken heart and strength that cannot end because that luxury doesn’t exist.
You can post a message of condolences on Kim’s page: https://www.facebook.com/profile.php?id=100000270780711
You can post a message of condolences on Ziv’s page: https://www.facebook.com/ziv.hagbi.1