Meirav Arlosoroff writes in The Marker (Haaretz’ economic magazine) that Bibi Netanyahu is a racist.

But….she also documents that he also has done far more for the Arab sector in Israel than anyone else.

She admits she’s confused. She says that Netanyahu speaks in a racist way (in her example, by specifically talking about law enforcement in his remarks about Arab society, which doesn’t strike me as proof of racism.)


While Netanyahu’s speech makes the impression of a lame and miserable racist, Netanyahu’s actions are the exact opposite. In December 2015, Netanyahu passed Resolution 922 – a historic and unprecedented decision to allocate NIS 10 billion to reduce the budgetary discrimination suffered by Israeli Arabs, which was promoted and managed by the Ministry for Social Equality, headed by Minister Gila Gamliel. Together with the Ministry of Education’s differential budgeting program aimed at narrowing the gaps between strong and weak pupils in Israel, the decision on which was previously accepted, the total investment in Arab society is likely to range from NIS 12 billion to NIS 14 billion. The approval of Resolution 922, which no Israeli government had dared to ratify, was accompanied by a fierce struggle against right-wing ministers, and was spread over three particularly stormy cabinet meetings. The racist Netanyahu, the one who incites against the Arab voters, is fighting with exceptional political determination to bring about the approval of the resolution. 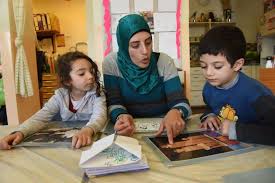 This week… Netanyahu devoted his precious time to receiving a report on the progress of the implementation of Resolution 922 , to promote decisions on the establishment of two new high-tech parks in Arab communities and to think about how to solve the barriers preventing the establishment of classrooms there. …

NIS 1.5 billion was allocated to strengthen Arab local authorities. NIS 800 million was allocated to education, including NIS 250 million for differential funding, NIS 260 million for informal education (afternoon classes), and NIS 175 million for absorbing Arab students in higher education. Another NIS 410 million was invested in employment guidance centers, the establishment of day care centers, the establishment of industrial zones and the subsidization of salaries of Arab workers.
…
Thus, for example, there is a clause that for any new allocation for public transportation, 40% should flow to Arab communities in the framework of affirmative action. This means that this is not an incremental budget, but rather a decision to allocate certain percentages of each ministry’s budget to Arab society, so that the allocation to Arab society should be permanent and ongoing.

Results in the field are already having  positive effect. Since the implementation of the plan, the percentage of Arab communities connected to the sewage system has increased from 40% to 85%; The number of trips by public transportation increased by 127%; The number of users using public transport increased by 77%; Eligibility for matriculation increased from 59% to 65% (excluding Druze and Bedouin); The proportion of Arab students out of the total student population rose from 14% to 16%; And 88,000 Arab children now enjoy classes in the afternoon.

The road to narrowing the gaps between Arab and Jewish society in Israel is still very long, but Resolution 922 is undoubtedly a historic milestone. Netanyahu is the man responsible for this historic breakthrough, but he is also the one who threatens its success with its inflammatory rhetoric.

Someone who clearly despises Netanyahu as an anti-Arab bigot has to admit that he is putting significant political capital behind helping the Arab sector, often against the wishes of his own coalition.

Here is another story that won’t be reported in Western media- because the “racist Bibi” meme is more powerful than the Bibi who actually cares about all Israeli citizens.